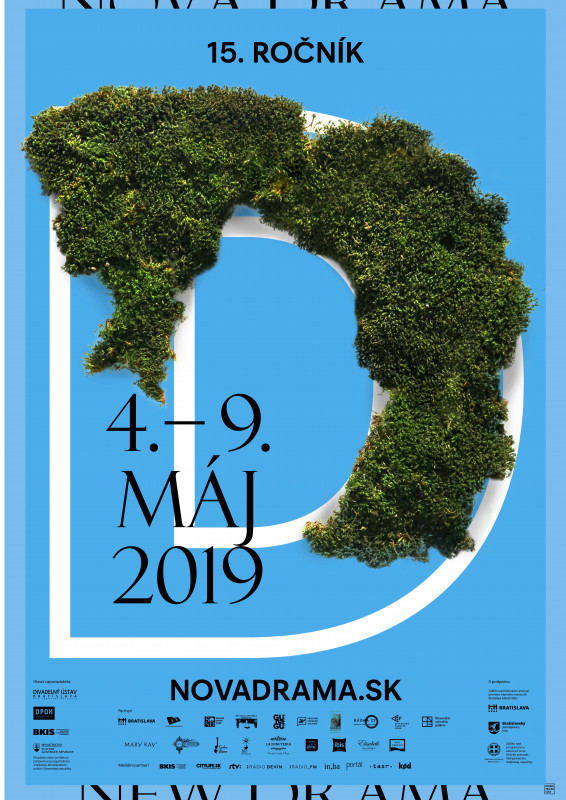 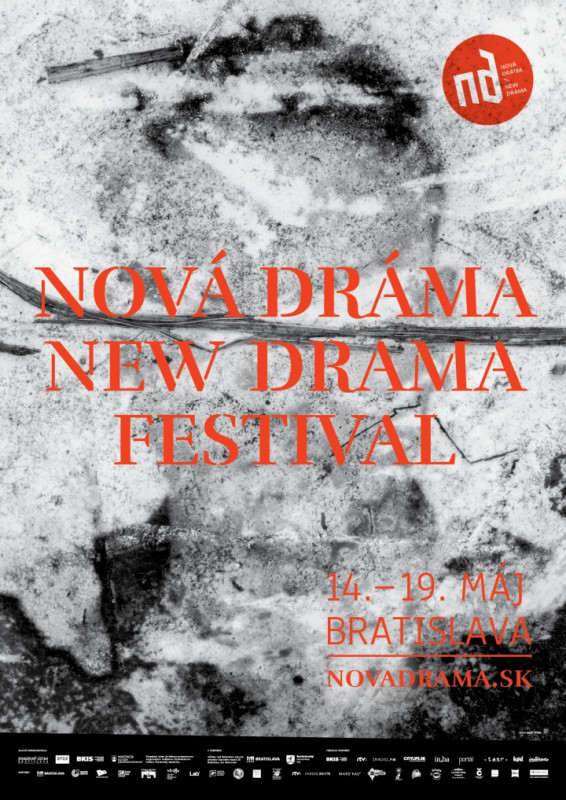 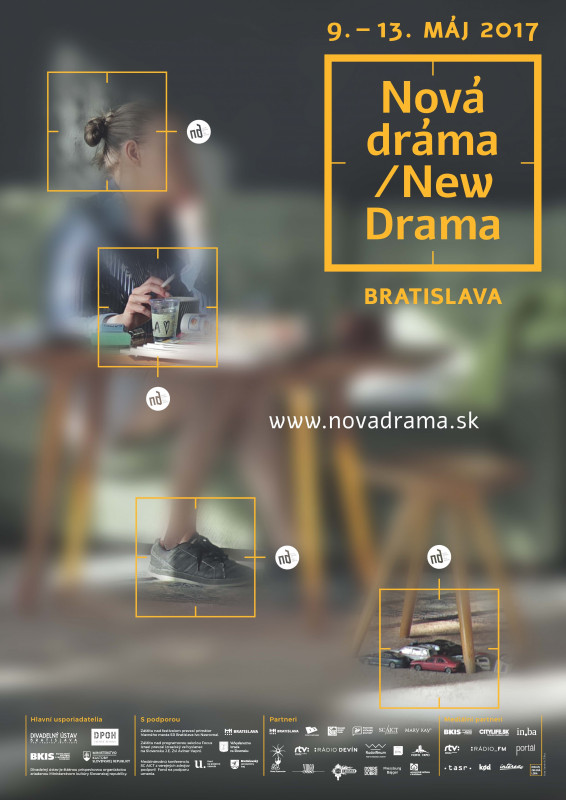 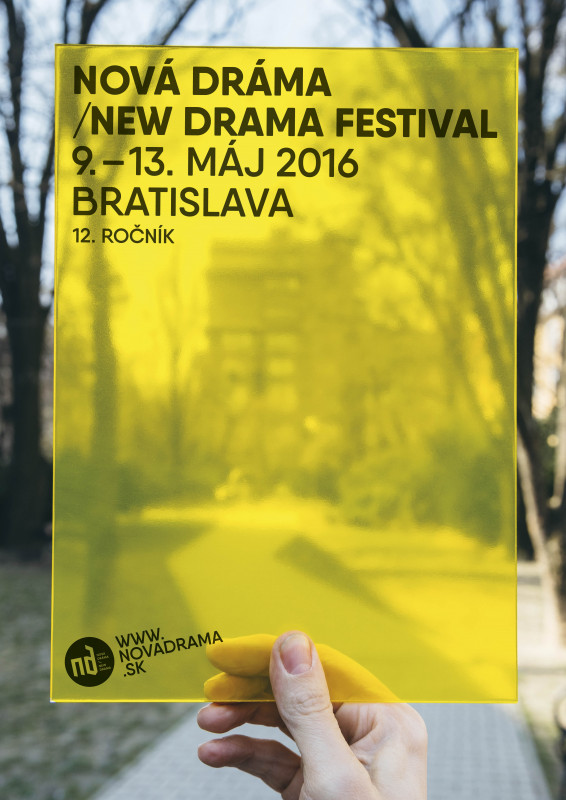 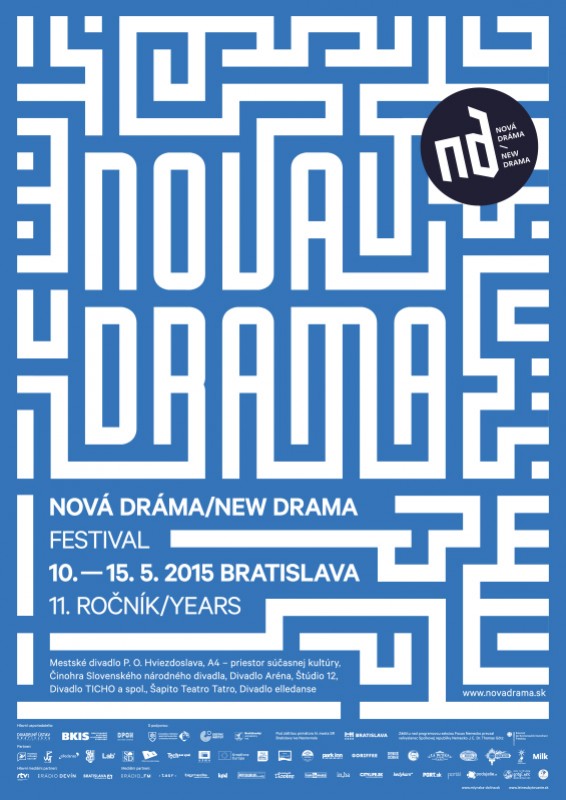 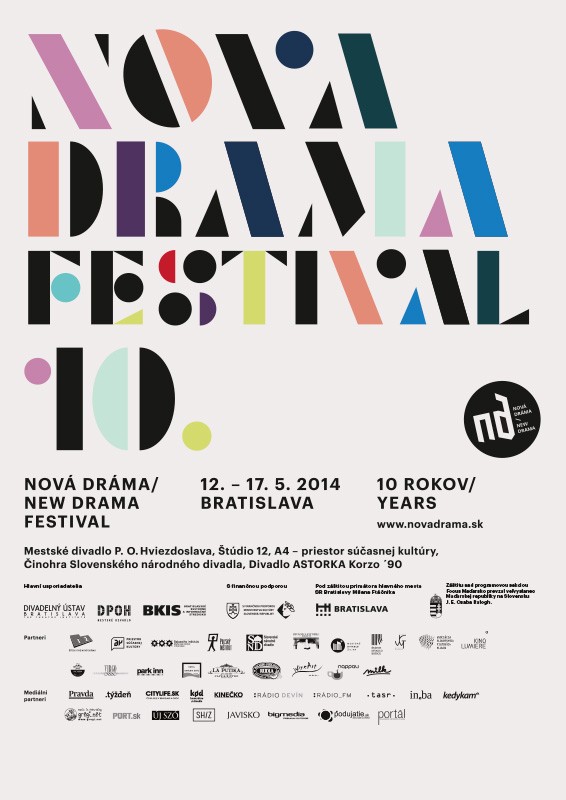 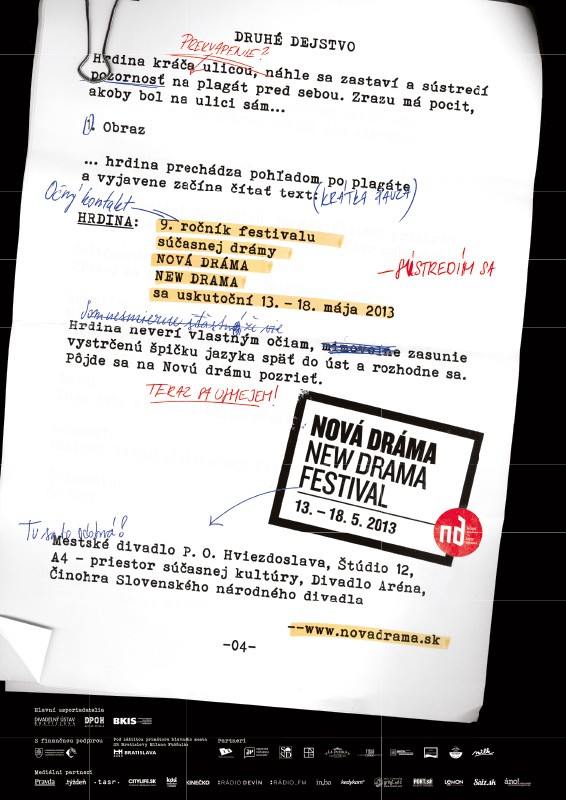 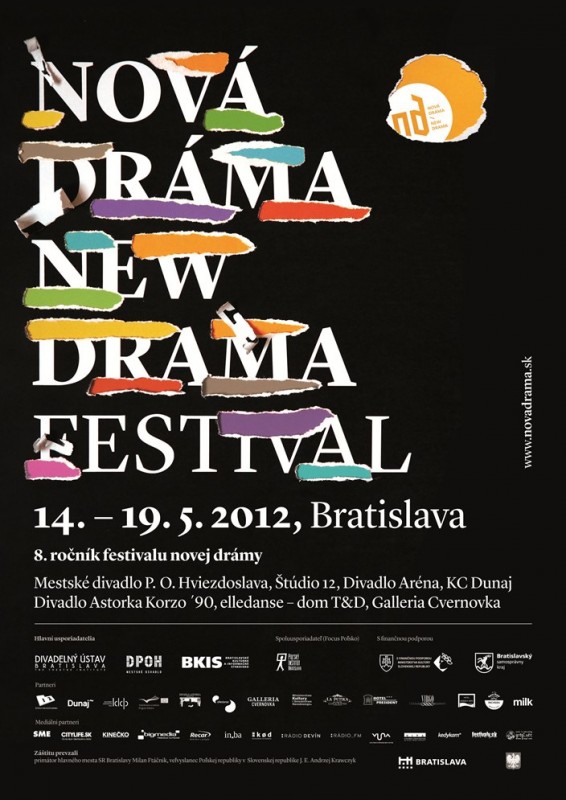 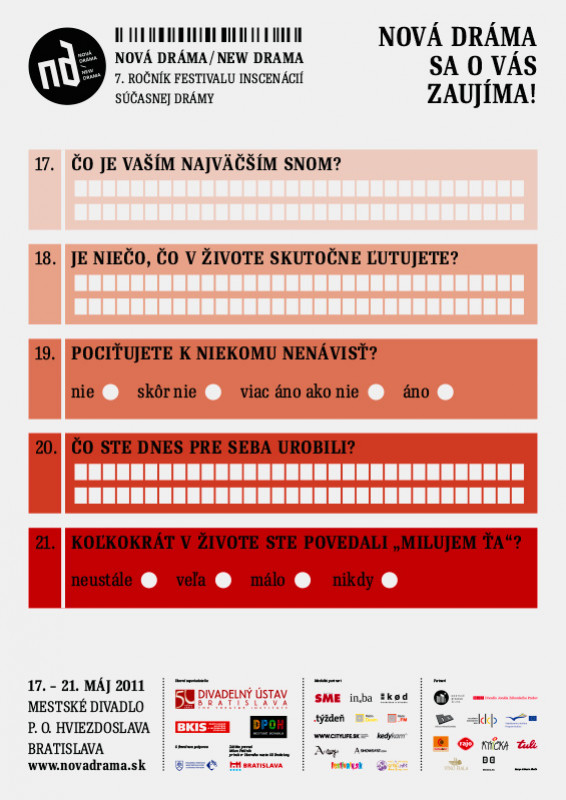 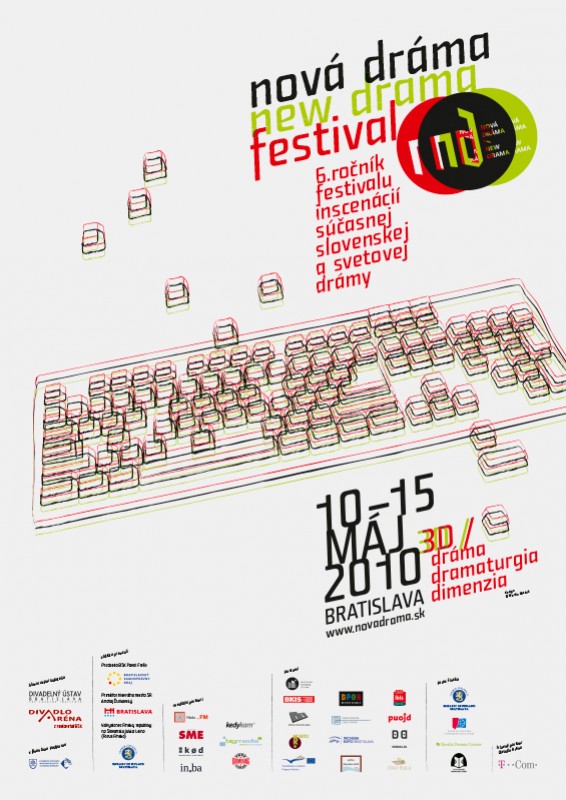 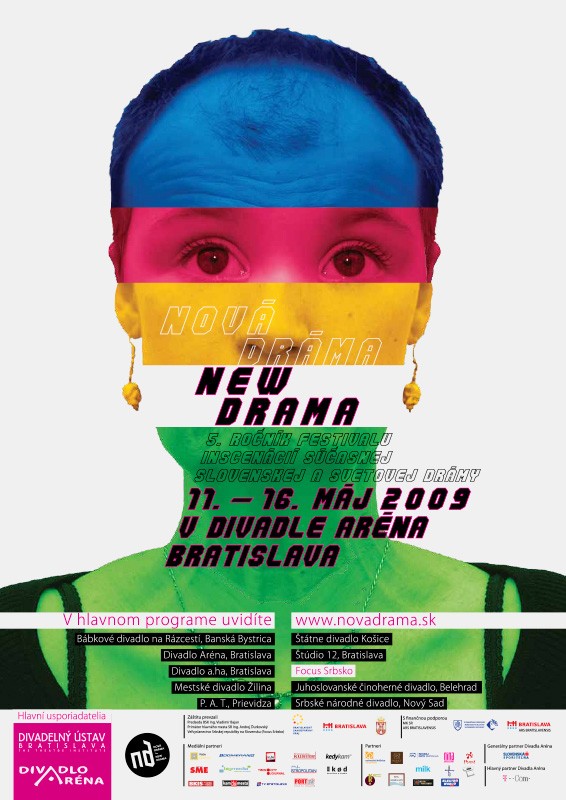 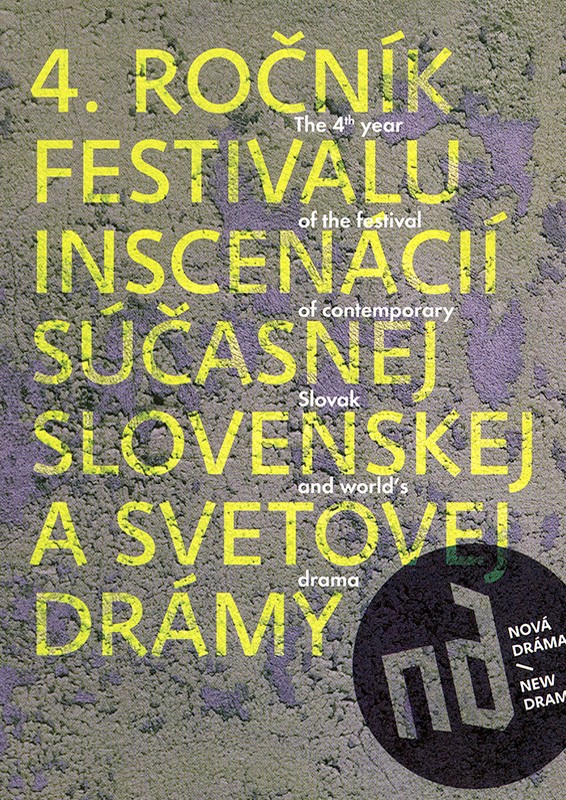 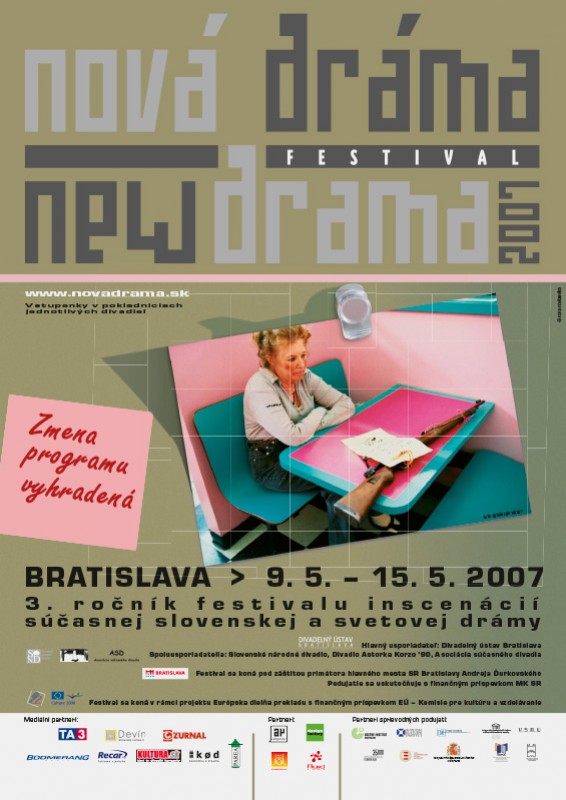 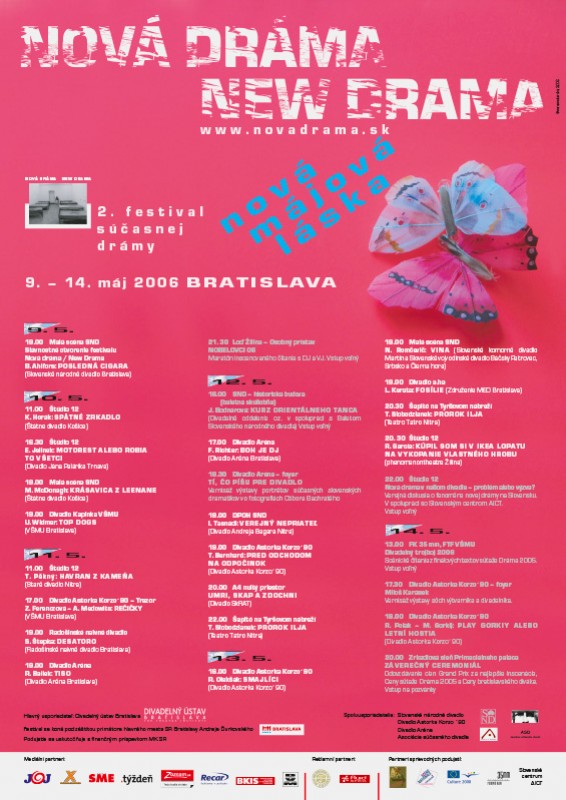 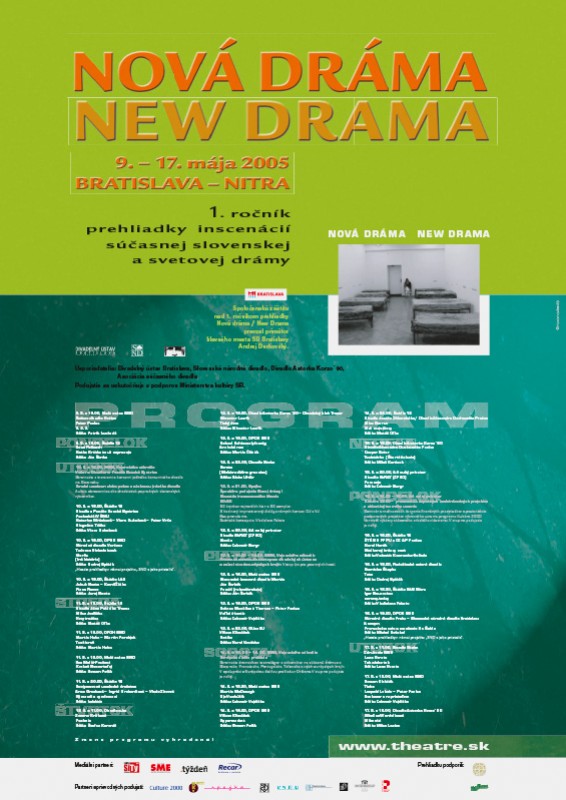 Prize for Dramaturgy
Martin Kubran
for the dramaturgy to Viliam Klimáček’s Communism
taking into account the series of plays produced by the Aréna Theatre reflecting Slovakia’s history (Tiso and Dr. Gustáv Husák)

Bratislava Audience Award
Puppet Theatre on the Crossroads, Banská Bystrica
for the production of Michal Ditte’s The Secret of the Skutecký House

Puppet Theatre on the Crossroads, Banská Bystrica
Michal Ditte: The Secret of the Skutecký House
(directed by Iveta Jurčová)

Triathlon 2009
Stage reading of texts shortlisted for the Drama 2008 competition, including a discussion with playwrights, creators and committee members.

Dramatically Young
Stage reading of drama debuts written by students of primary and secondary schools. A presentation of the second year of the Theatre Institute’s nationwide educational project.

Peculiar relations of New Drama (2009)
The festival’s closing ceremony and the awarding of festival prizes.
(directed by Kamil Žiška)

„We are happy that the fifth Nová dráma/New Drama festival found its home stage in the Aréna Theatre because this festival presents the most inventive and original contemporary Slovak drama of the previous year. Our theatre also aspires to be inventive and original. I wish you to be able to take away from the festival an understanding of what is new as well as the desire to keep discovering new things in theatre.“

„A well-organized festival in all aspects – rich in its programme offer and useful accompanying events. What is more, it culminated in a humorous and fittingly self-ironic presentation of the closing ceremony during which the prizes were awarded.“

„The festival has enjoyed increasing attendance – last year, besides Slovak spectators and theatre enthusiasts, more than sixty international guests from 14 countries of Europe and the USA attended it, thus confirming that New Drama is a positively perceived and highly valued cultural event in the capital city.“

„"I think that in a time when commercial television is spoiling the viewers’ taste it is very important that culture, in particular theatre, has such festivals as New Drama. It is important in order to make festivals like this be attended by the general public – not just by a small group of theatremakers. (...) New Drama provides space to present productions which have not yet been proved by time, but are interesting, innovative, original and creative", said Zuzana Kronerová, honorary director of the festival.“