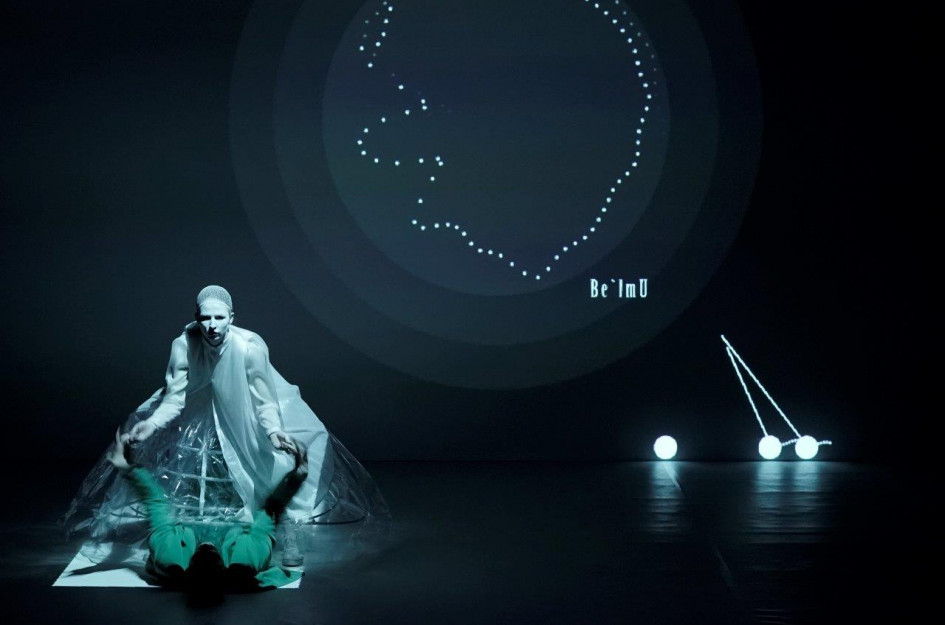 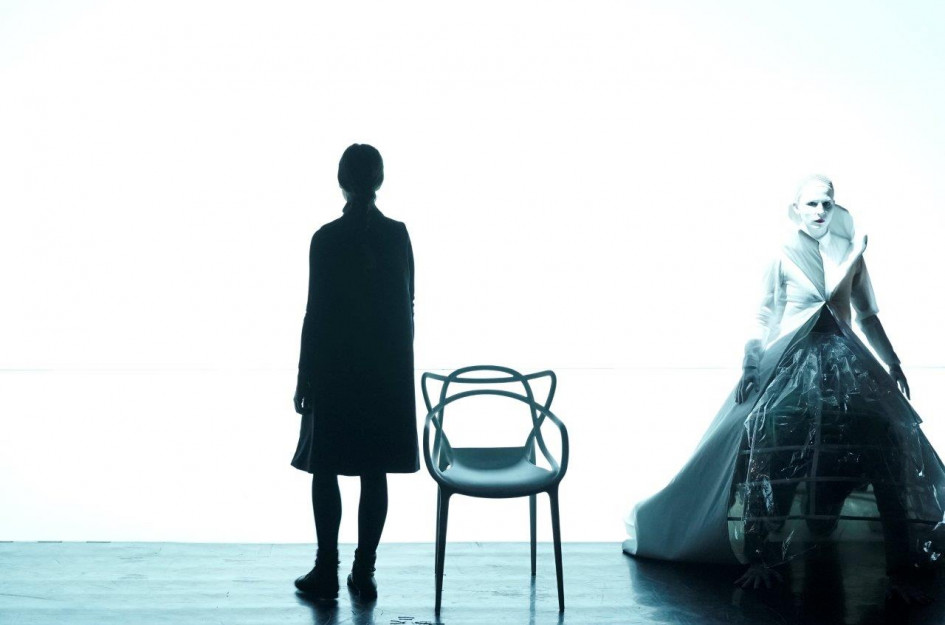 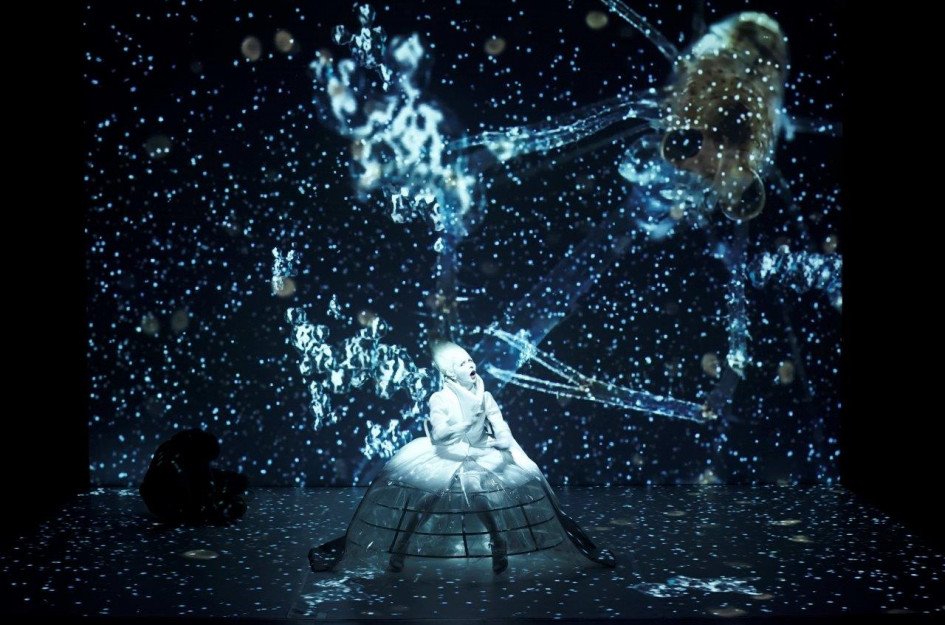 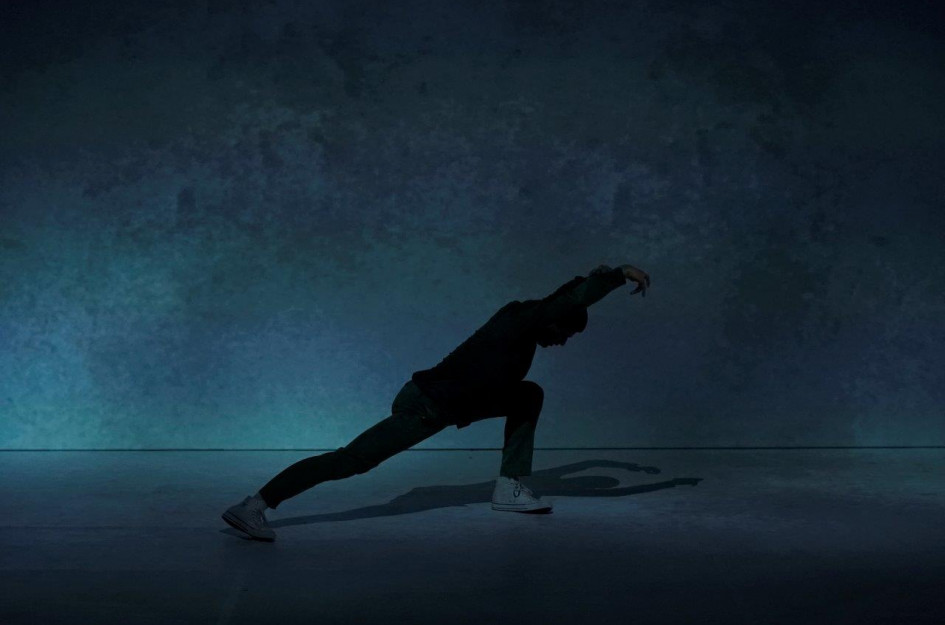 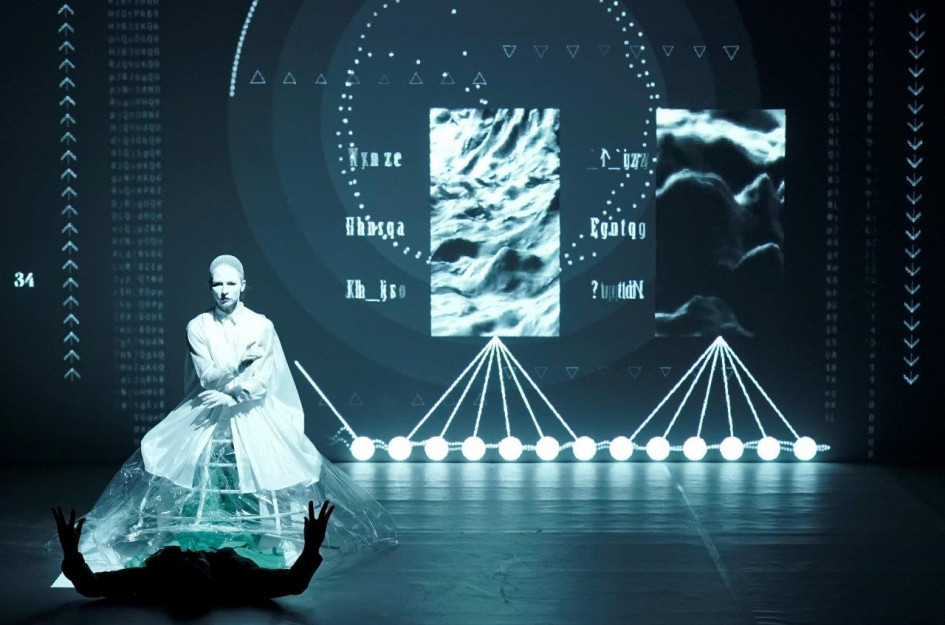 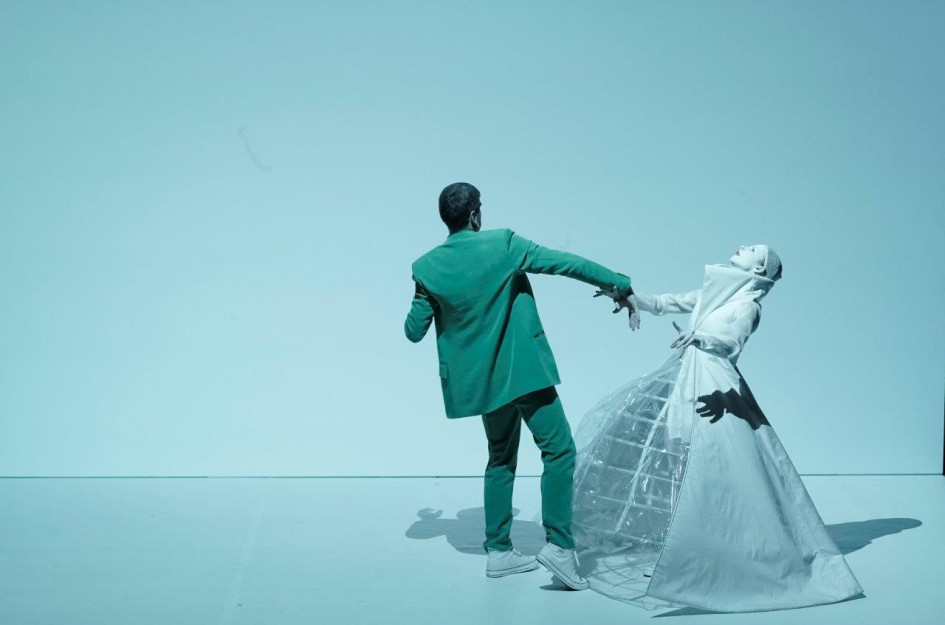 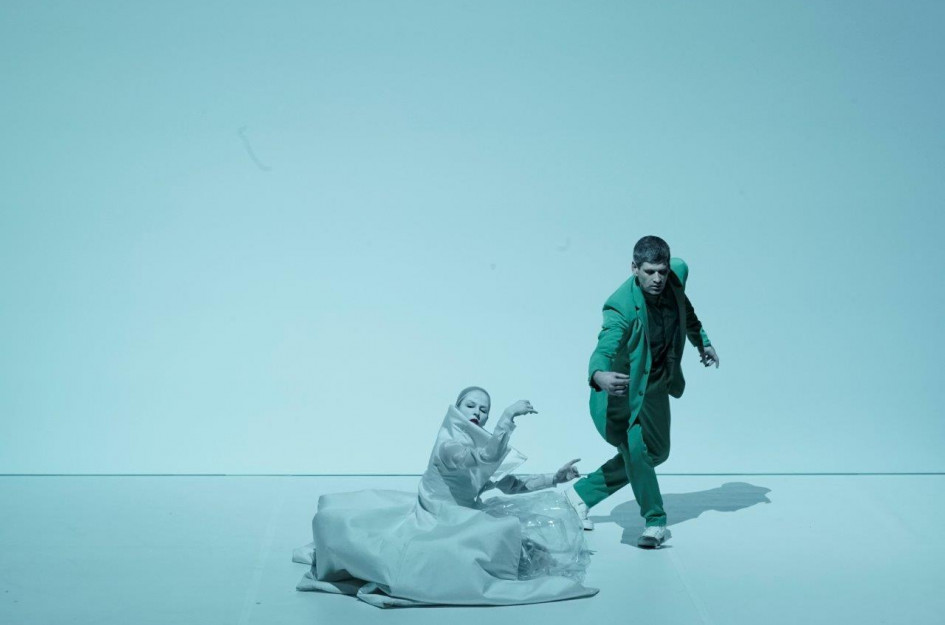 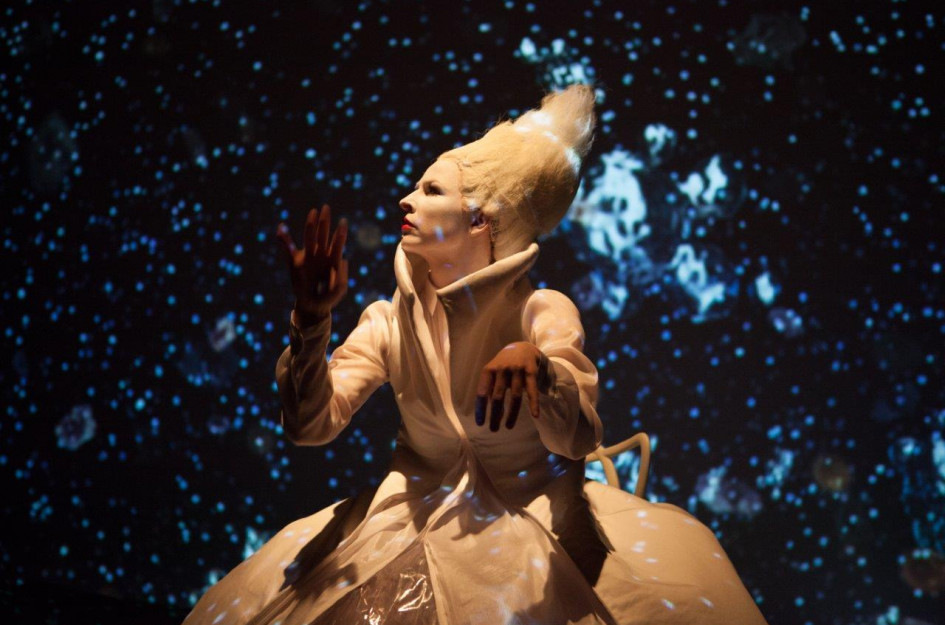 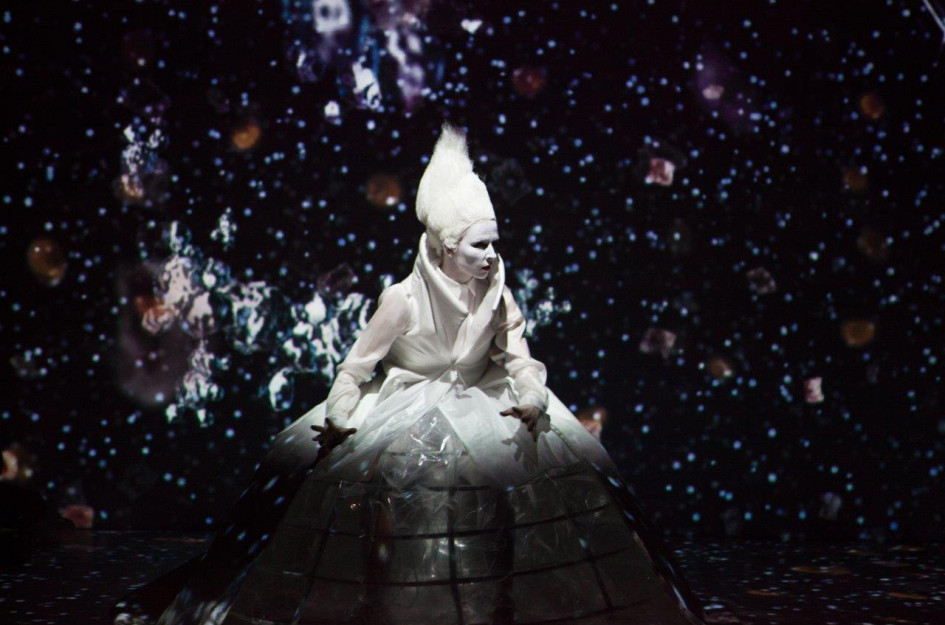 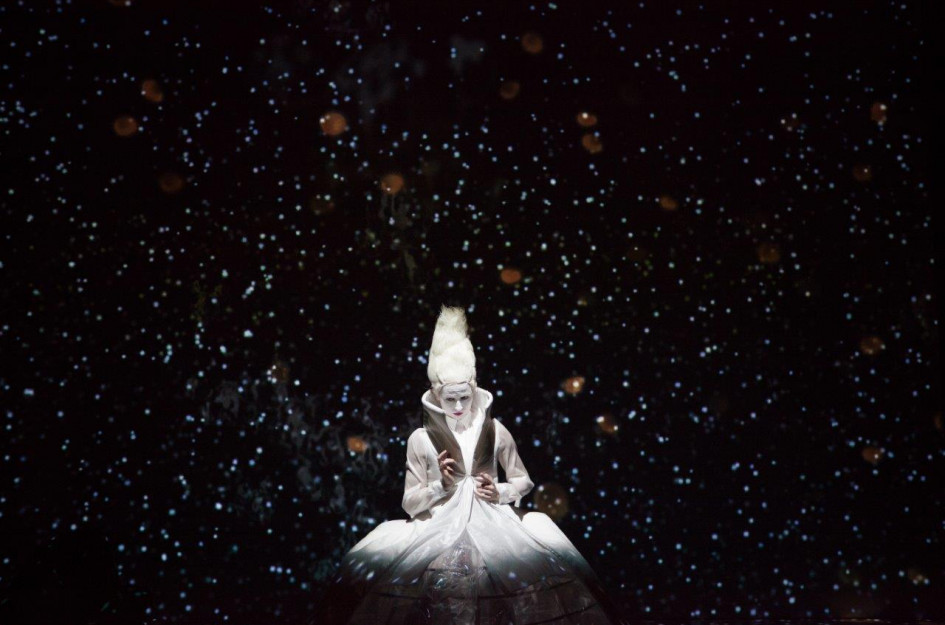 The solitude of humankind is translated into the pure visuality of movement, image, music and the omnipresent voice of the narrator, or an omniscient entity commenting on the situation and events. It is a situation, in which the world changes from a created civilization to a creating civilization.

Being enchanted by the universe and the physical phenomena that make the world go around is no longer common practice these days. This kind of fascination with things that appear to be normal and common, but still are the fundamental condition of our existence, was the determining factor for the artists’ creative approach.
This is a visually strong production using the essence of the creation of life and its regularities. The solitude of humankind is translated into the pure visuality of movement, image, music and the omnipresent voice of the narrator, or an omniscient entity commenting on the situation and events. It is a situation, in which the world changes from a created civilization to a creating civilization. A couple of characters – man and woman – embodies the two poles of one world, where the rules which are applied are made and adjusted by people themselves.
The production captures the incredible changes that had occurred in the world before people were created, as well as the revolution that took place when the human civilization was born. Humans, being part of the created species, are moving, quietly admiring the world that transcends them. The people’s insistent effort at becoming not just observers, but the makers of the entire mechanism, might just pull them under. These are disturbing questions we cannot answer – we just feel an urge to ask them.

The Debris Company theatre ensemble was established at
the end of 1994. On the Slovak theatre scene, Debris has been a unique group
focusing on non-verbal theatre that crosses over to contemporary dance,
performance, visual art and site specific projects. The leader of the company,
director and music composer of a majority of productions is Jozef Vlk, who most
frequently collaborates with performers Martin Ondriska, Martin Piterka and
choreographer Stanislava Vlčeková.

At present, the company focuses on devised projects,
cooperating with prominent Slovak and international artists. Productions from
the company’s repertory of the most recent seasons (Soliloquy, Dolcissime sirene,
Hexen, Mono, Epic, Clear, WOW, The Abduction of Europe)
were staged in Slovakia, the Czech Republic, France, Belgium, Germany, Austria,
and Singapore, among others. The artistic achievement of the Debris Company was
often honoured by the DOSKY awards. The Debris Company does not have its own
theatre space: it produces and stages most of its projects in collaboration
with A4 – Centre for Contemporary Art.

Eugen Gindl is a Slovak journalist and script writer.
As an activist in civil and environmental associations during the communist
regime, Gindl was one of the authors of the samizdat publication Bratislava/Aloud (1987). During the
Velvet Revolution, he was a member of the first Coordination Committee of the
Public Against Violence political platform. In 1995, he participated in the
writing of the publication titled The
Prosperity Shock – A Reader in Global Issues
. He is the author of several
radio plays (co-written with Ondrej Sliacky), and film and television
screenplays. His theatre play Carpathian
Thriller
was produced by the Slovak National Theatre in 2013.

Freelance author, director, composer, musician,
performer and producer. In his work, he focuses on contemporary and electronic
new music, contemporary dance, theatre and film. He has been repeatedly
nominated for the seasonal DOSKY awards. In 2008, he received the Award for the
production of Canto Hondo in the Best
Stage Music of the Season category (co-authored by Kamil Žiška and  Ján
Kružliak). In 2012, he was awarded another DOSKY prize as the sole music
composer of the dance performance Rose/3Balet. At the 2015 Nová
dráma/New Drama festival, the title Clear
by the Debris Company, directed by Vlk, won Special prize of the Jury for
“innovative work with text and high production quality achieved despite the
tough conditions in Slovak independent theatre art”.