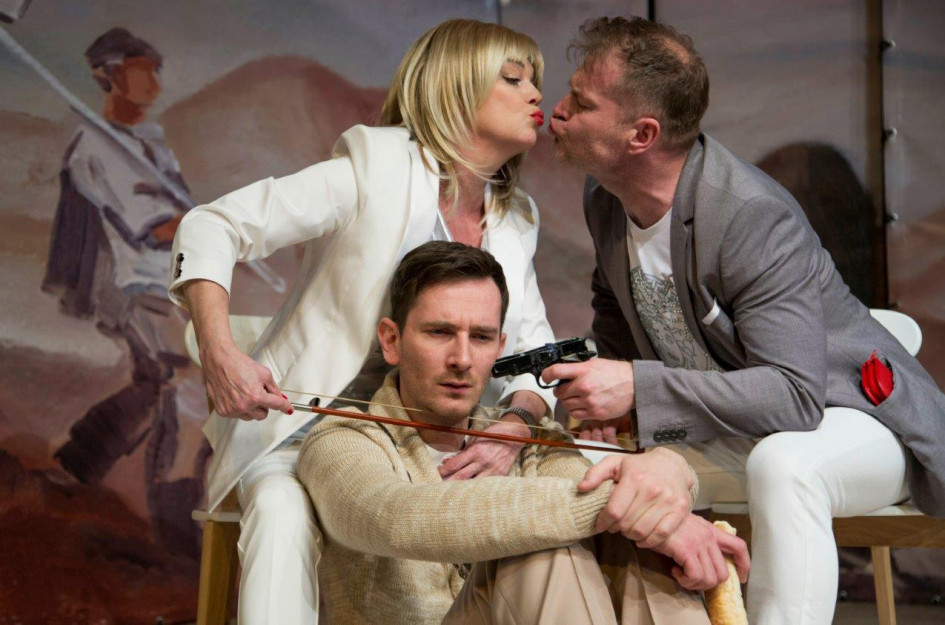 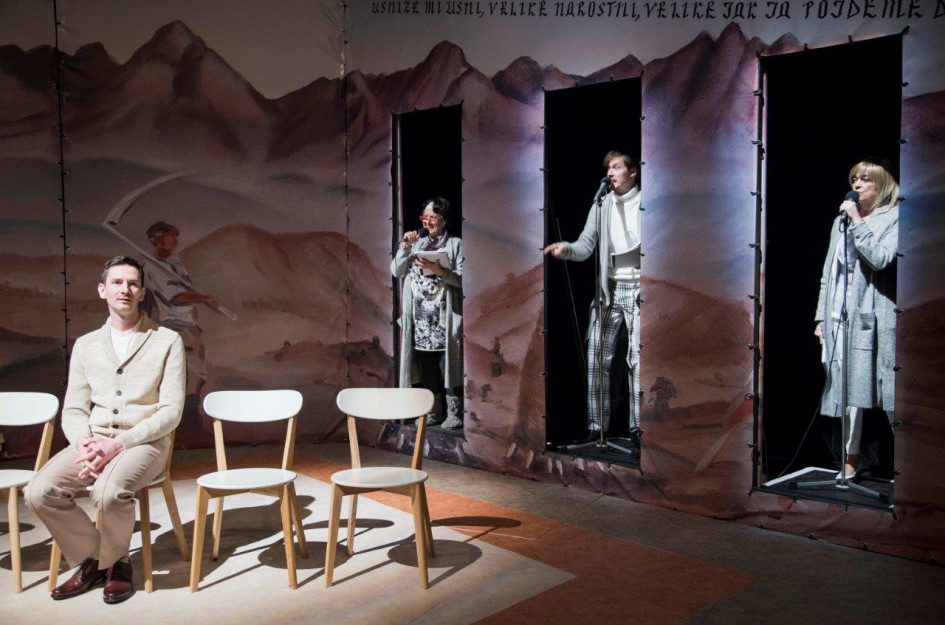 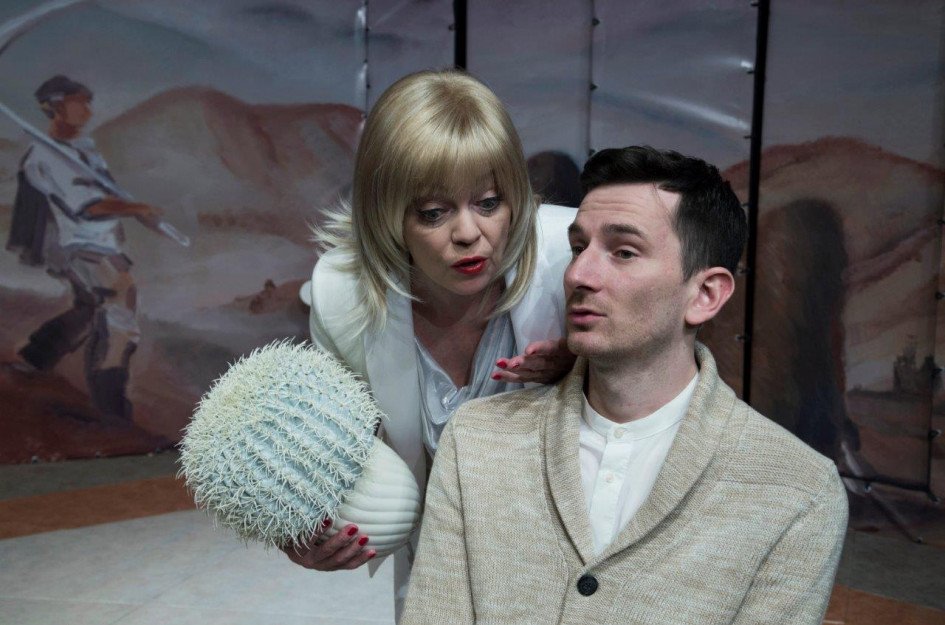 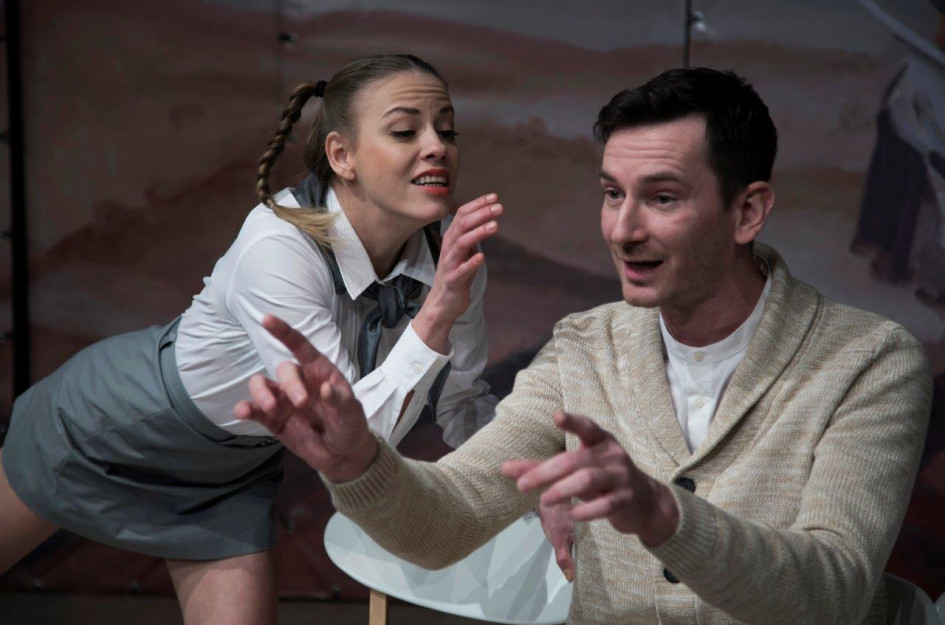 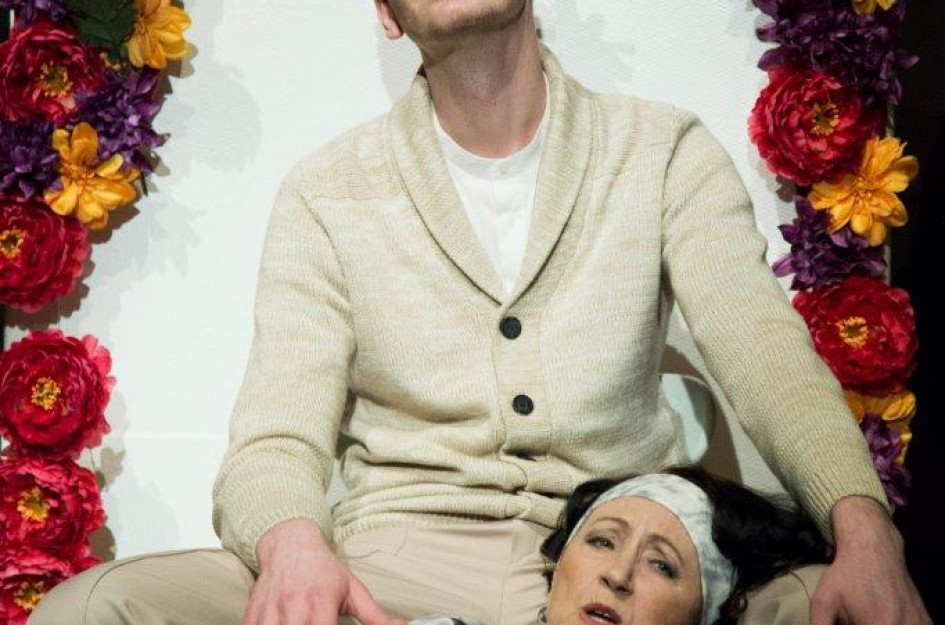 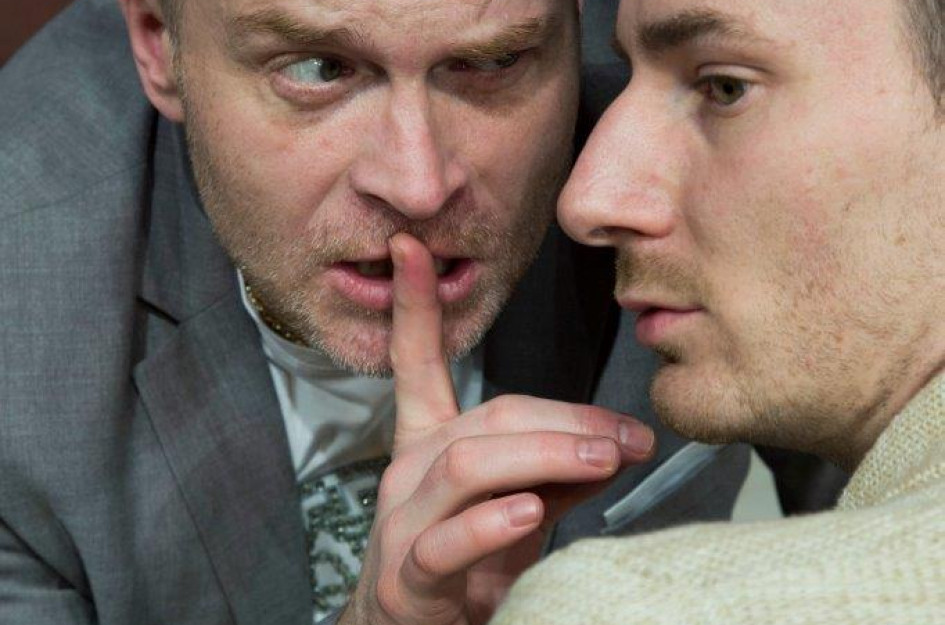 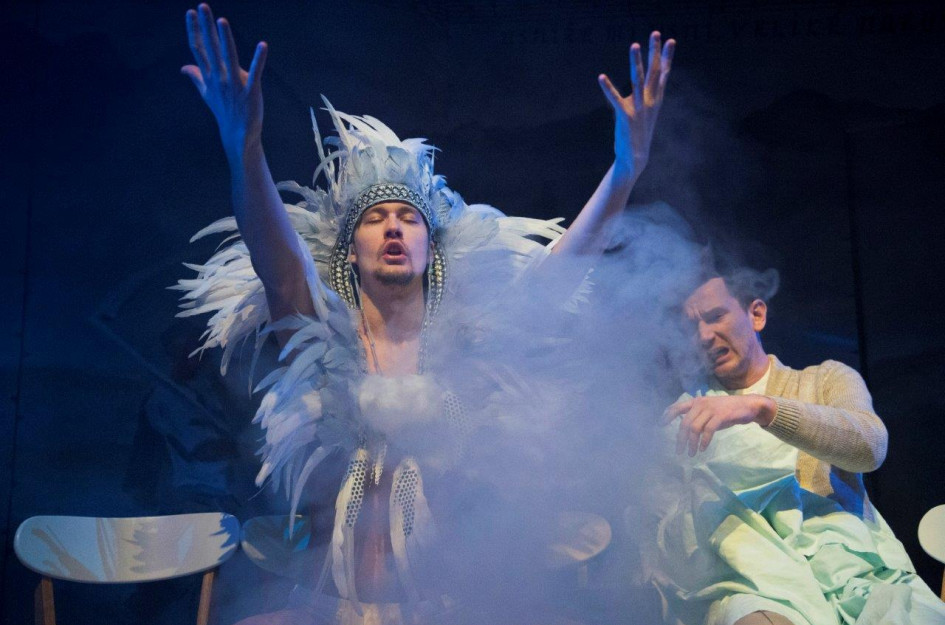 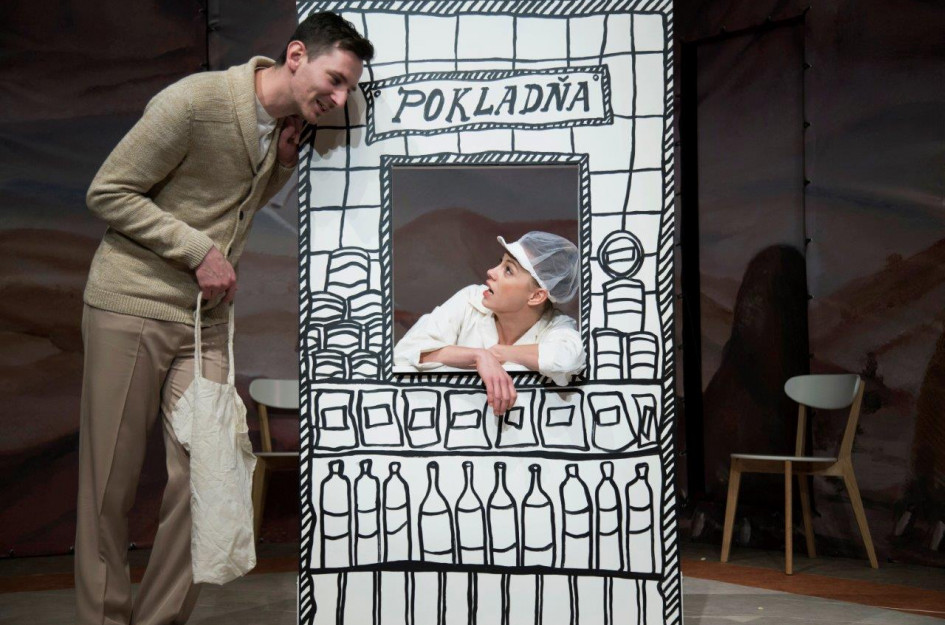 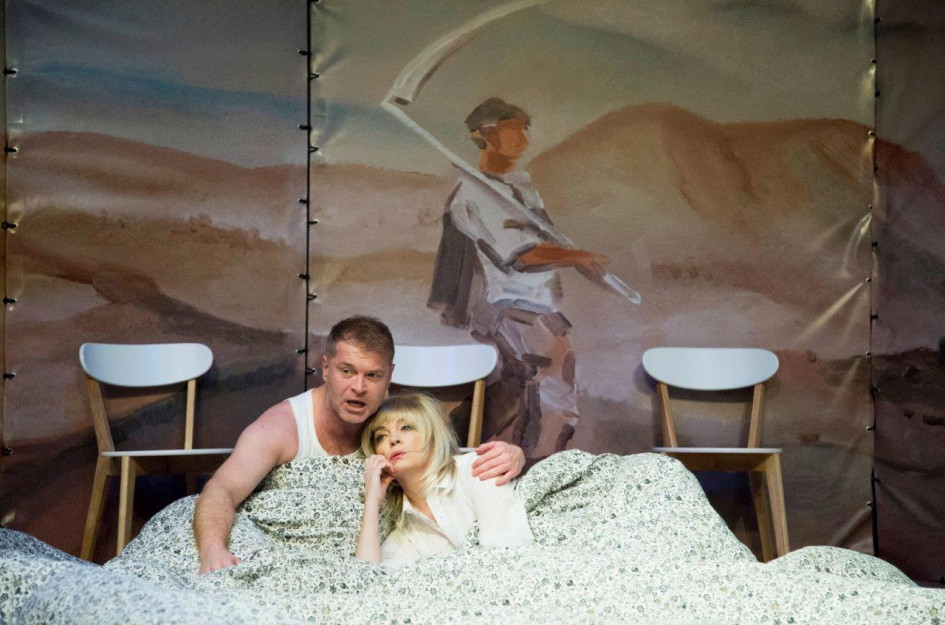 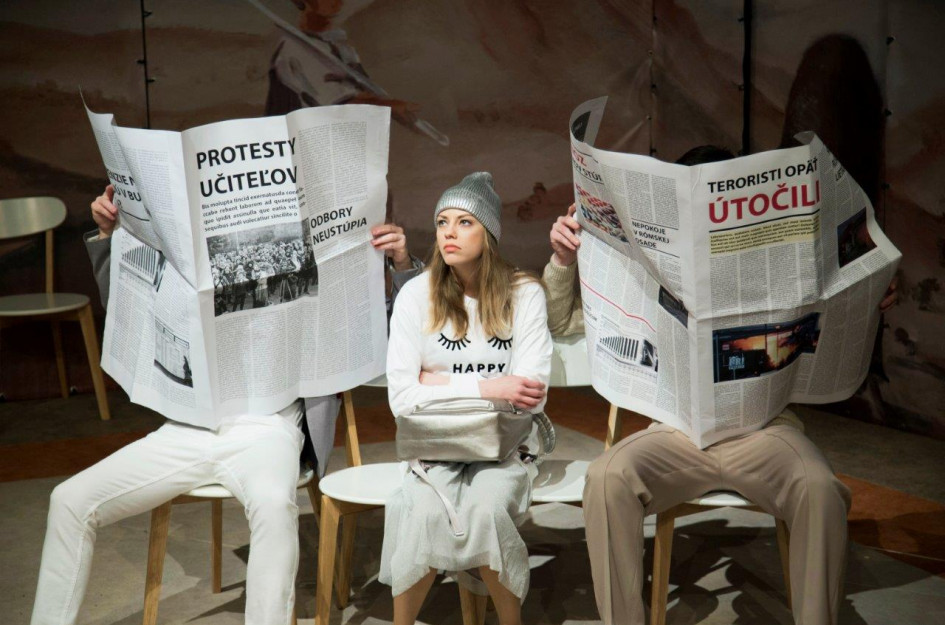 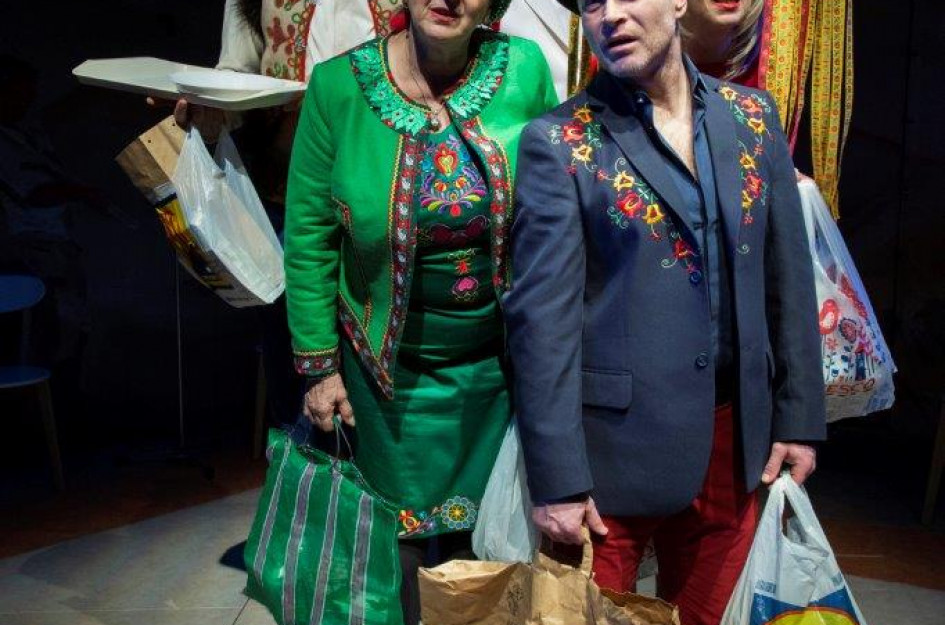 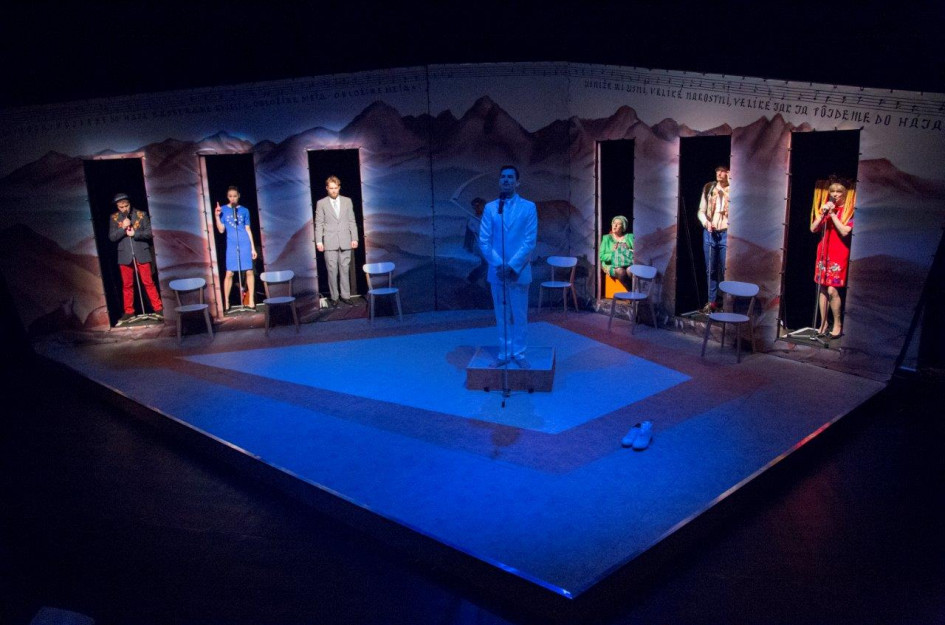 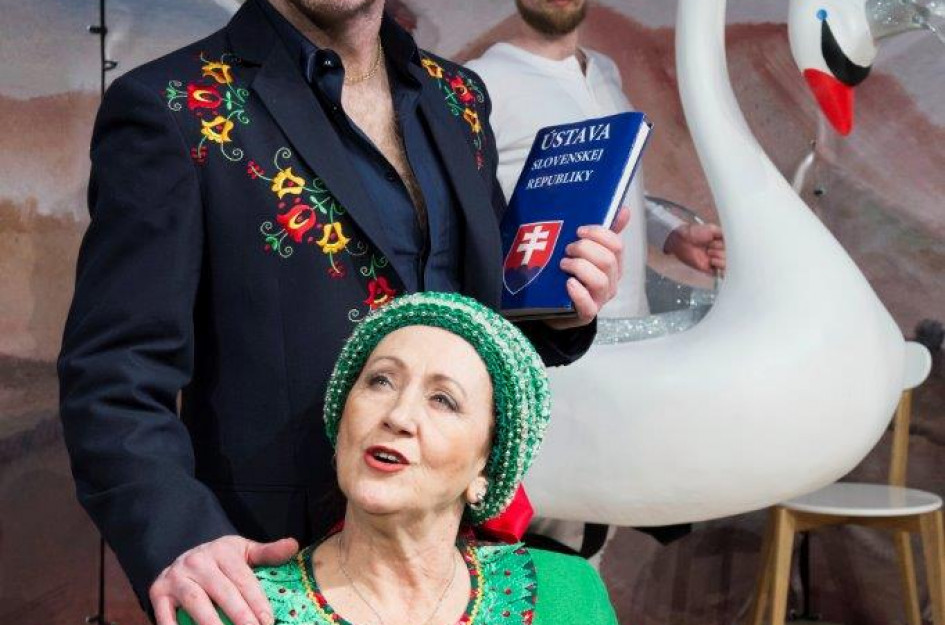 The play’s text, written by famous Slovak playwright Laco Kerata and commissioned by the Andrej Bagar Theatre, is very diverse both in terms of its form and content. It makes references to various dramatic styles (voiceband, absurd theatre) as well as to specific layers of language related to the issues that are discussed in Dobro’s presence.

Dobro (the protagonist of the production bearing the same name; “Dobro” means goodness) is a peculiar parody of the heroes in initiation novels. He experiences a variety of situations in which he gets to understand who pulls the strings in this world. An unsuccessful actor, a timid stay-at-home still living with his mother is gradually pushed – by his predatory relatives and a mobster “friend” – to take a job in Brussels. Once there, he should become the face of the Slovak EU presidency. “Dobro” also means the “good stuff”, i.e. the advantages and big profit his Slovak supporters expect he will amass in the centre of European bureaucracy. But the goodness they await goes amiss. In Brussels, Dobroslav gets out of control. The play’s text, written by famous Slovak playwright Laco Kerata and commissioned by the Andrej Bagar Theatre, is very diverse both in terms of its form and content. It makes references to various dramatic styles (voiceband, absurd theatre) as well as to specific layers of language related to the issues that are discussed in Dobro’s presence. A great many things happen for Dobro to see: there are Turkish soap operas, psychoanalysis in the kitchen, there is even “our doll Eva Mazikova”. On the backdrop of all this flood of aggressive life kitsch, Dobro’s bumps into a genuine Apache wearing a huge feather headband in a sauna. This weird encounter is a breath of fresh mental normality. The Nitra ensemble, led by their in-house director Svetozár Sprušanský, has proved once again that their regular participation in the festival is no coincidence. As usual, the group has mastered the unconventional methods of new drama with relish, assurance and obvious delight.

Laco Kerata graduated from the
Academy of Performing Arts in Bratislava, where he majored in theatre direction
in 1989. While still a student, he directed plays for the Slovak National
Uprising Theatre in Martin (today’s Slovak Chamber Theatre) and was an actor in
the Theatre for Children and Youth in Trnava. In 1991 he was one of the
founders of the cult theatre Stoka in Bratislava where he worked as an actor,
director and core author. Later, he also worked for the theatre groups MED and
Non.Garde. For Stoka, he wrote several plays inspired by theatre of the absurd
(Backslide, among others) and the
Andrej Bagar Theatre produced his play A
Dinner Above the City (1994). A selection from his radio plays was
published as a book titled Radio Plays (1999).
In addition to his work for the theatre, Kerata is a poet and novelist. His
novel Bad Actor, whose protagonist
shares some traits with Dobro, was shortlisted for the Anasoft Litera 2010 prize.

Svetozár Sprušanský graduated in theatre studies from the
Department of Drama and Puppetry of the Academy of Performing Arts in
Bratislava. After completing his studies, he worked as a dramaturge (from 1996)
and later also as a director in the Andrej Bagar Theatre in Nitra where he
helped create several successful productions (The Proposal – The Bear,
Macbeth, A Dream Play). In 2000,
Sprušanský was awarded the Literary Fund’s Prize for the direction of the
productions of The Seagull and Fireface (Andrej Bagar Theatre in Nitra)
and in 2003 he received the Dosky Award for best direction of the season for Three Sisters (Andrej Bagar Theatre in
Nitra). He often works as a guest director at several Slovak theatres, most
notably the New Stage in Bratislava, the Jonáš Záborský Theatre and the
Alexander Duchnovič Theatre in Prešov. At present, he works as the
artistic director and chief dramaturge at the Andrej Bagar Theatre in Nitra. His
productions (especially of German drama) are regularly included in the
programme of the Nová dráma/New Drama festival.