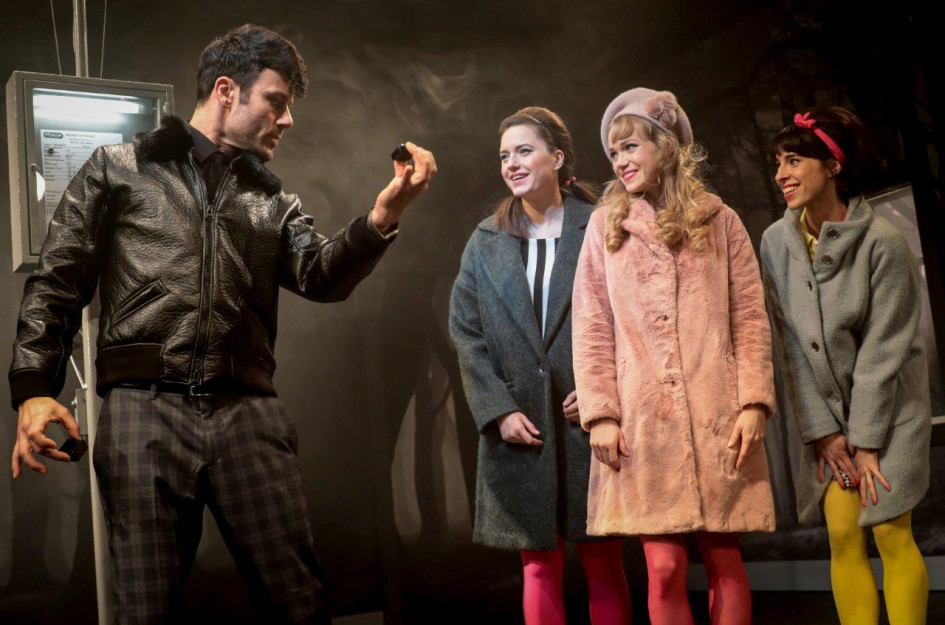 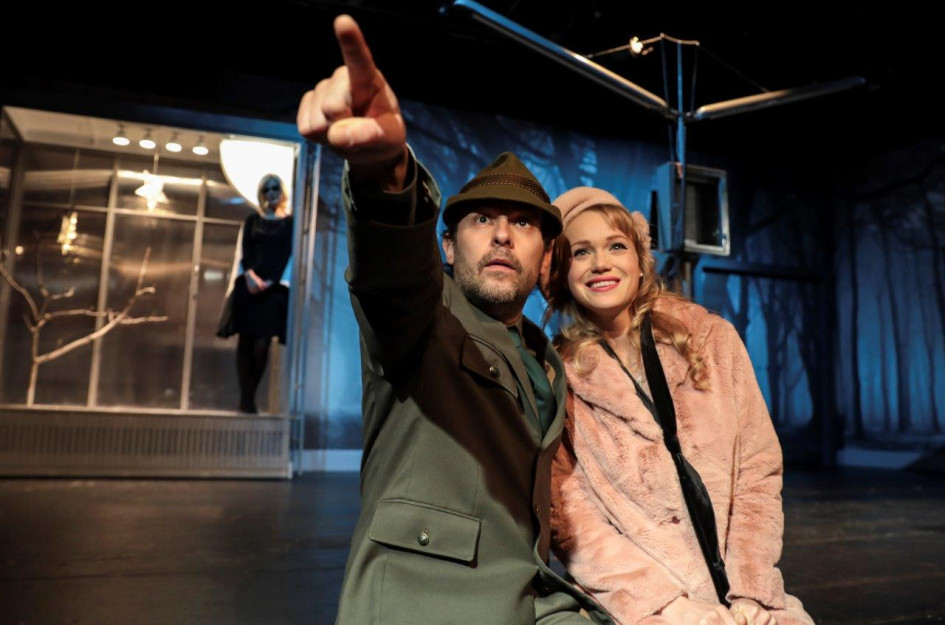 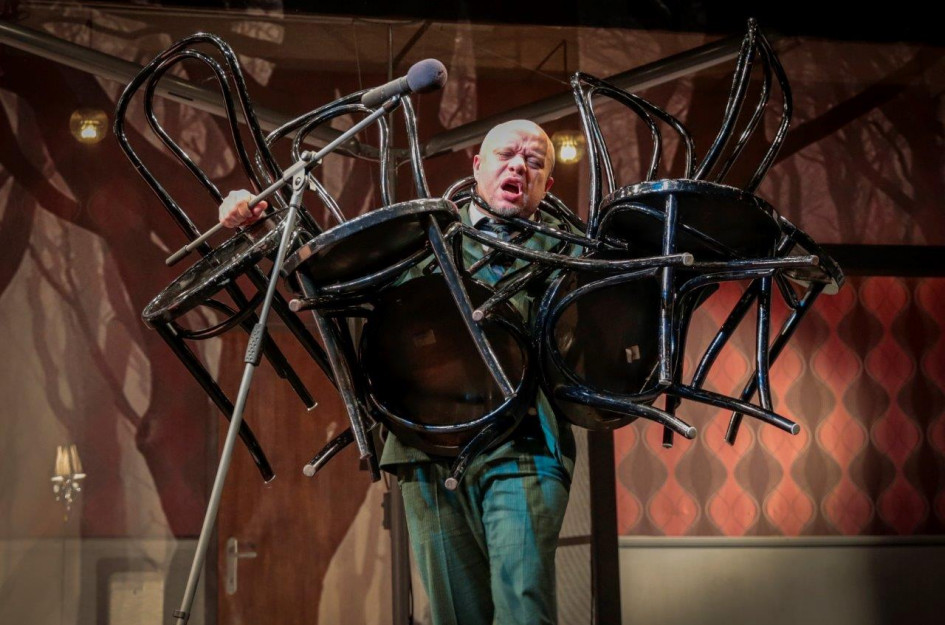 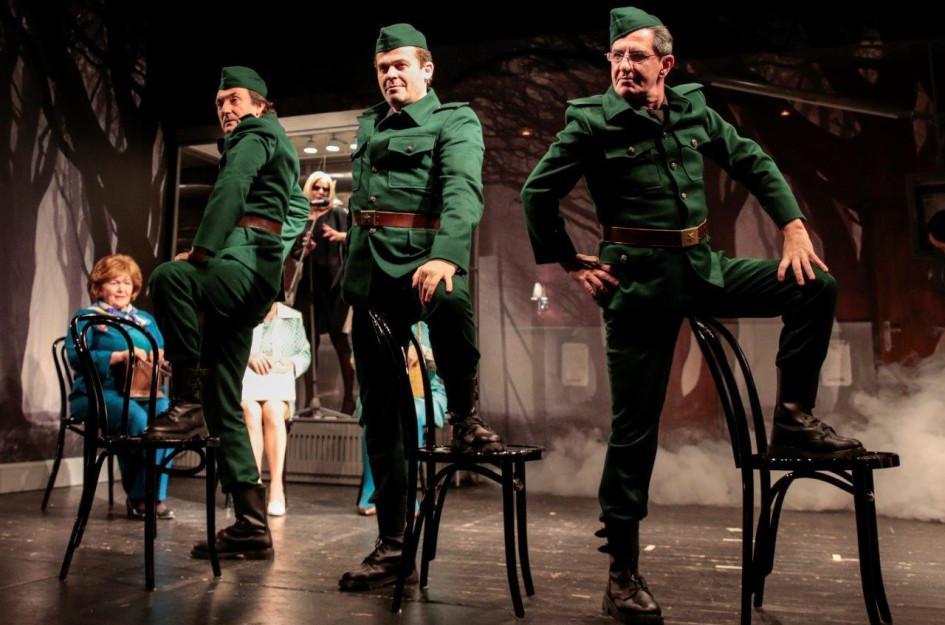 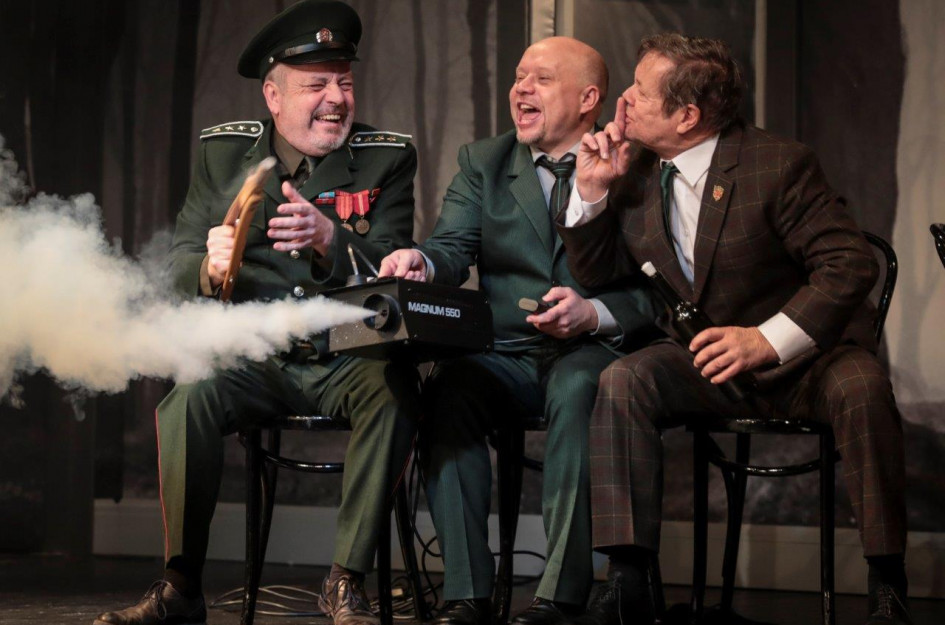 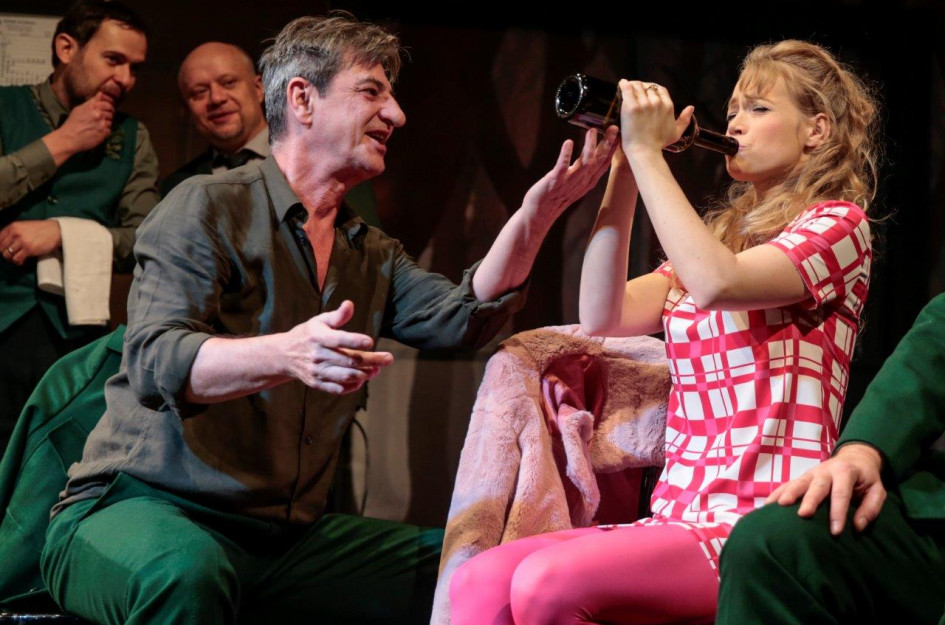 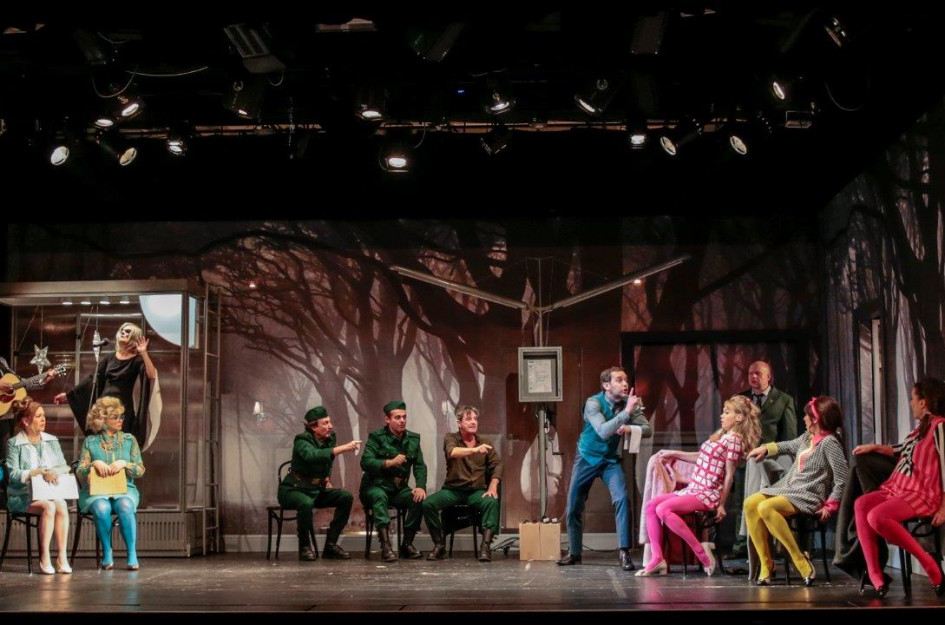 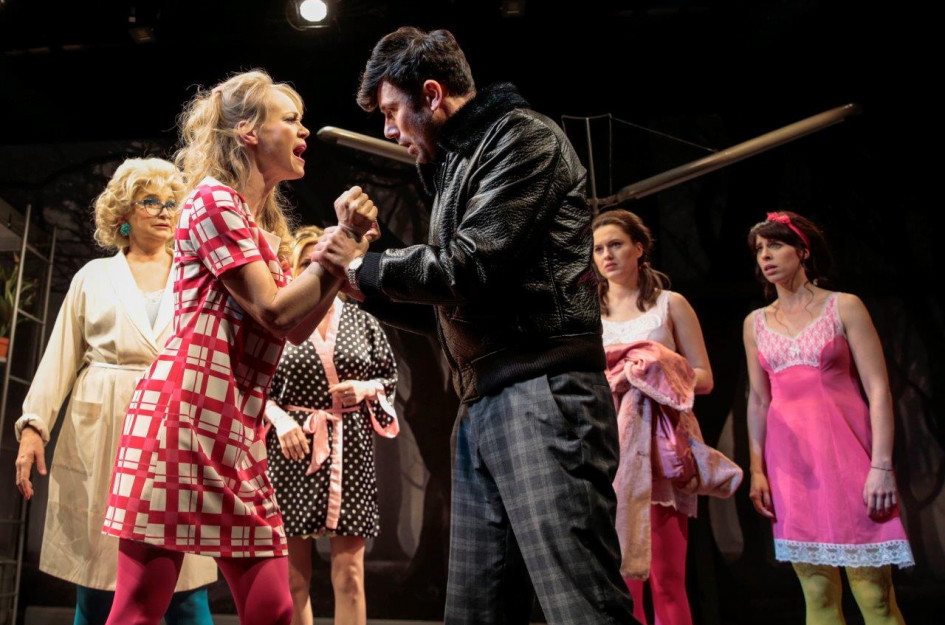 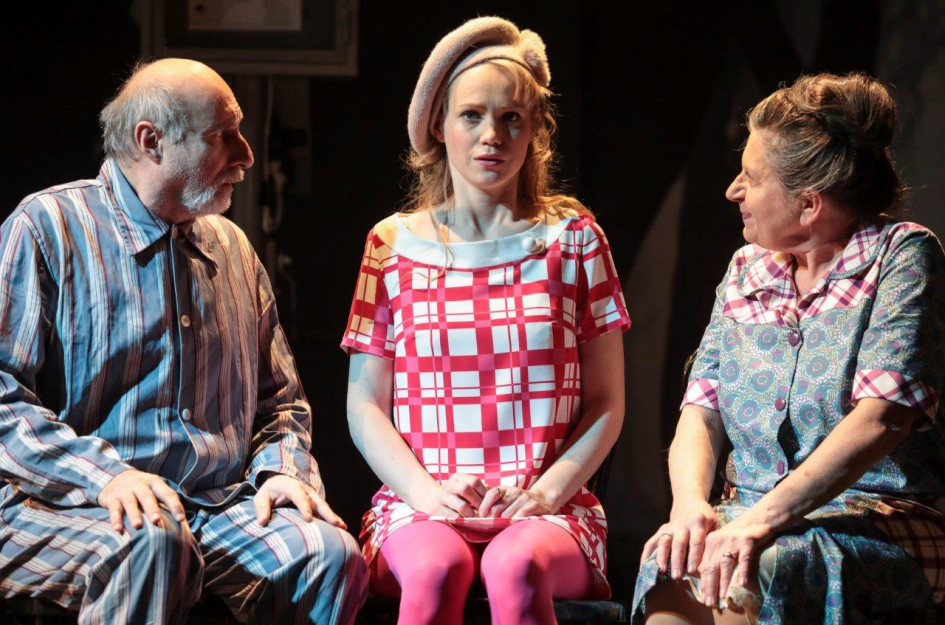 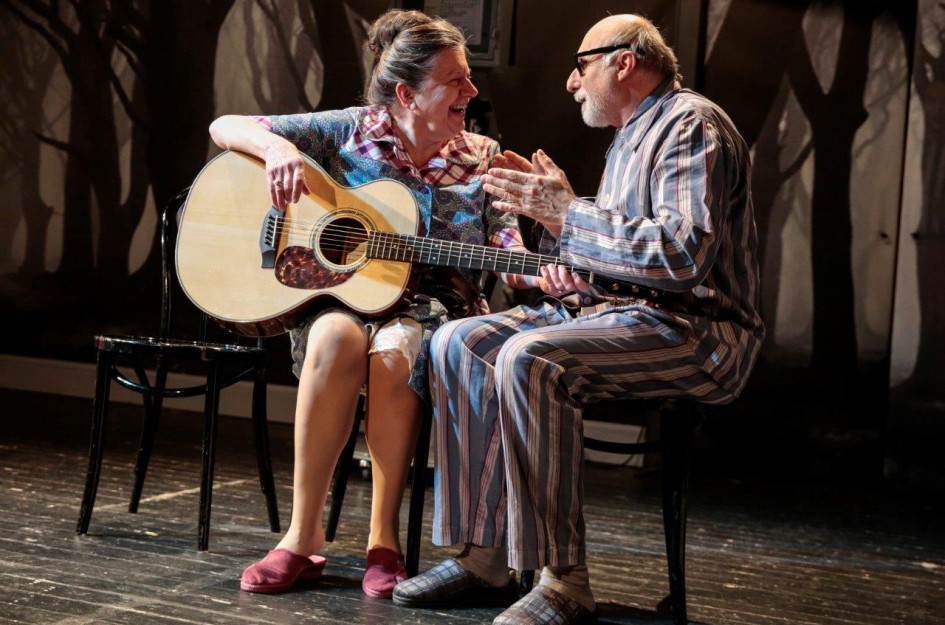 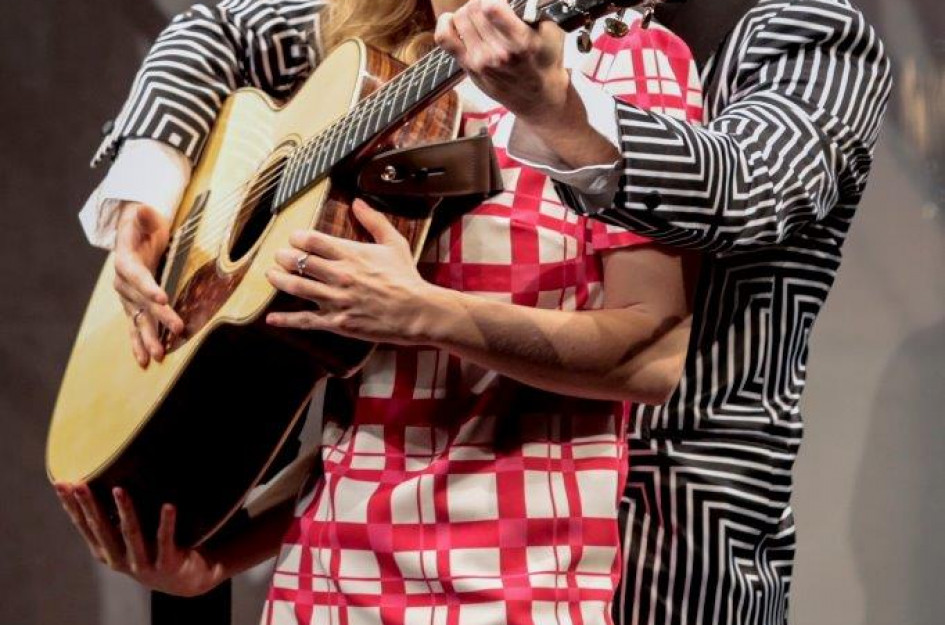 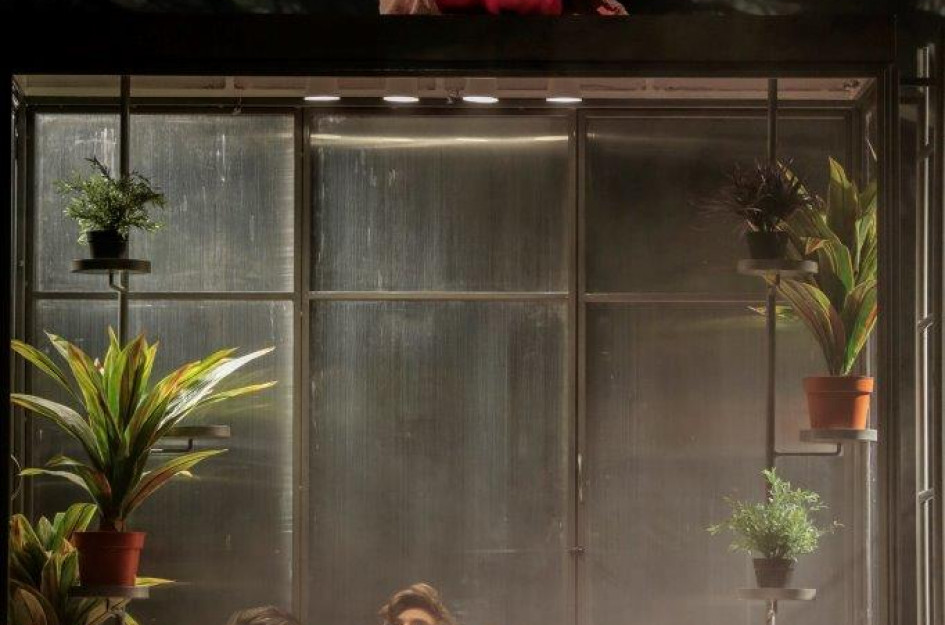 The Loves of a Blonde

The production of the Czech creative duo SKUTR uses a fragile and poetic language to discuss the little things that make up the backdrop of big history.

There are many potential obstacles when adapting films to the stage – problems the theatremakers have to deal with. In the process, the original work may even be spoiled, or, conversely, specific and attractive elements may be found in it that have until then been unimagined and hidden. The Czecho-Slovak theatre duo Martin Kukučka and Lukáš Trpišovský (working under the name SKUTR) chose the latter path. They took a legendary film title and found in it elements of child-like playfulness and naiveté, which may not transcend the historical period and its circumstances, but which still make it a very concrete testimony of the relationships and people living in the 1960s in Czechoslovakia. The simple, if not banal, story of a girl who starts a relationship with a musician at a party, is incorporated into a chain of little, but very thoroughly performed images and characters that are created by the actors in a compact fashion. The production of the Czech creative duo SKUTR uses a fragile and poetic language to discuss the little things that make up the backdrop of big history. It presents characters, both big and small, with whom we can easily identify. These characters allow us to rise above the situation in which the boundaries of the historical era and time mercilessly leave their imprint in our memory.


Since  its
foundation in 1990, the ASTORKA Korzo ʼ90 Theatre has been true to the
tradition of the original “Divadlo na Korze”, which became famous for its
innovative dramaturgy and direction. In addition to modern interpretations of
classical theatre works, ASTORKA’s current focus is on contemporary dramatic
texts.  A ground-breaking moment came
with its first devised production Empty Hole, directed by Michal
Vajdička (2015), which celebrated great success at the BOZAR centre in
Brussels, at the 2016 Nová dráma/New Drama festival, and at the 2016 Divadelná
Nitra international festival.


The theatre, and its actors, performers and artists,
have received numerous theatre awards, including  Dosky
(The Forest, Smug Citizens, Tales from the Vienna Woods, Quartet, The
Farmer’s Blood
), Awards and Prizes of Litfond, Bratislava Audience Award (The
Comet
), Don Quijote Main Prize at the Belgrade festival (A Month in the
Country
) – and many others.

Film screenplay writers and directors, authors of the
script for the movie The Loves of a
Blonde,
which has served as the basis for the staging text of the
production of the same name.

The Czech tandem of directors – SKUTR – is made
up of Martin Kukučka and Lukáš Trpišovský. They started working together while
they were still students of professor Josef Krofta and Miloslav Klíma’s at the
Theatre Academy of Performing Arts.

SKUTR has presented its productions at
festivals in Poland, Lithuania, Italy, Germany, Slovakia, China, etc. The
international reputation of SKUTR climaxed with the month-long guest appearance
at the Fringe Festival in Edinburgh in August 2008 – their production The Weepers was performed 22 times and
nominated for the Total Theatre Award. The production Joke Killers, created in tandem with Adéla Laštovková, represented
the Czech Republic at the 2010 Expo in Shanghai.

SKUTR’s devised performances merge dance,
movement, acrobatics, puppetry, projections, light design, text and sound, and
could be defined as multi-genre or cross-over productions.  Using the above mentioned approaches, SKUTR
created productions inspired by Internet communication, works making use of
Hans Christian Andersen’s themes, productions about traditions or inspired by
the new circus, and so on.