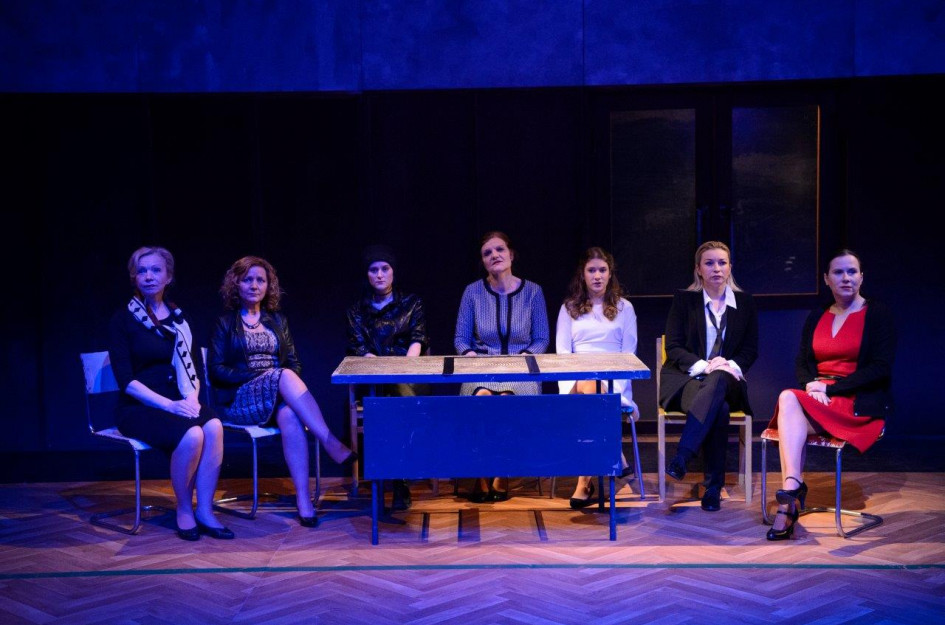 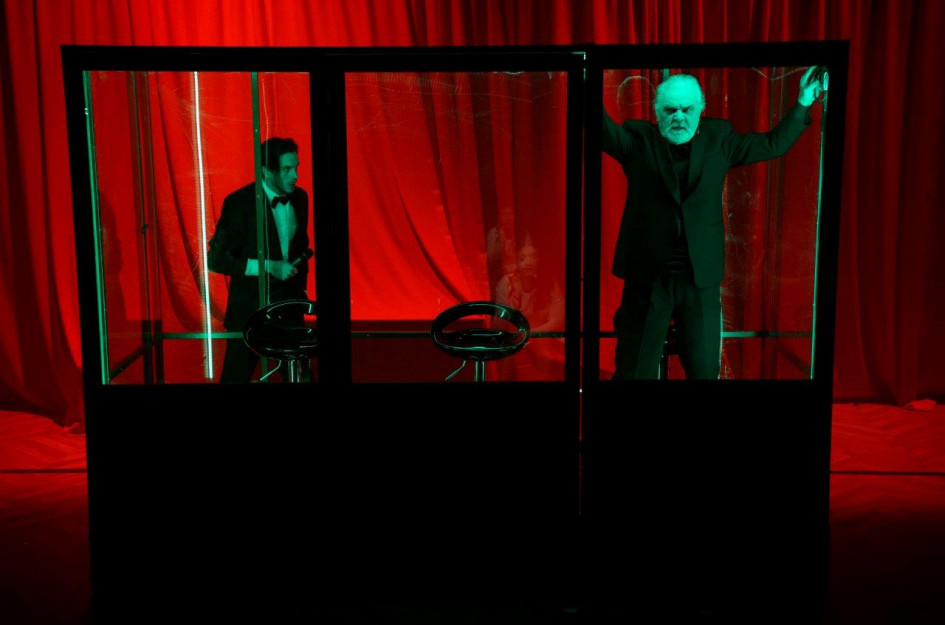 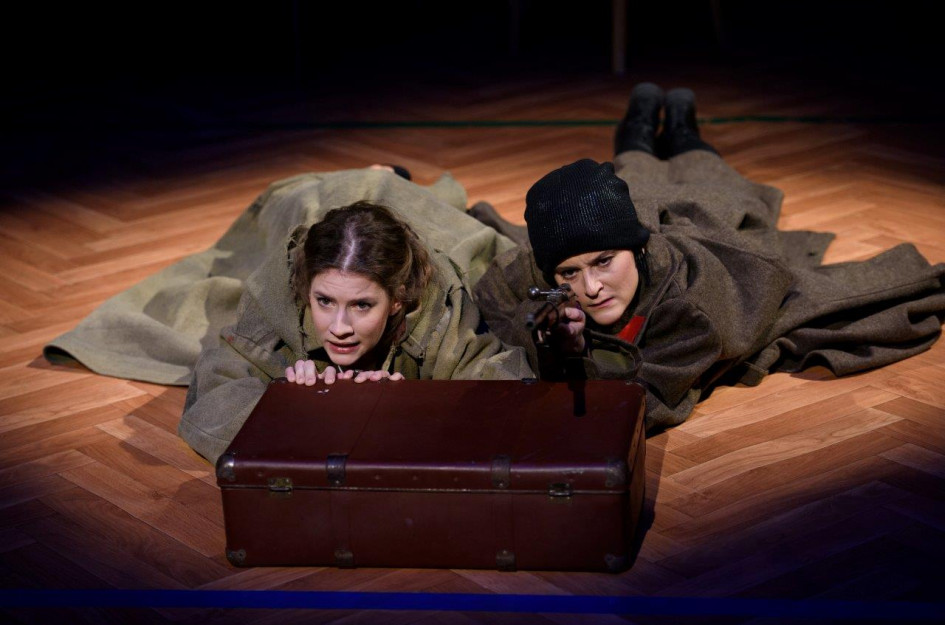 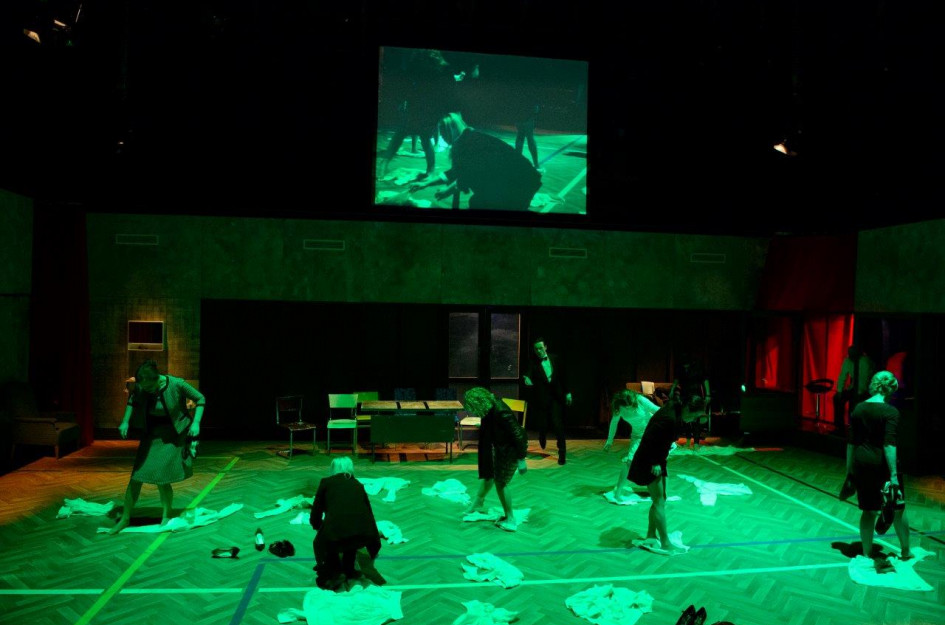 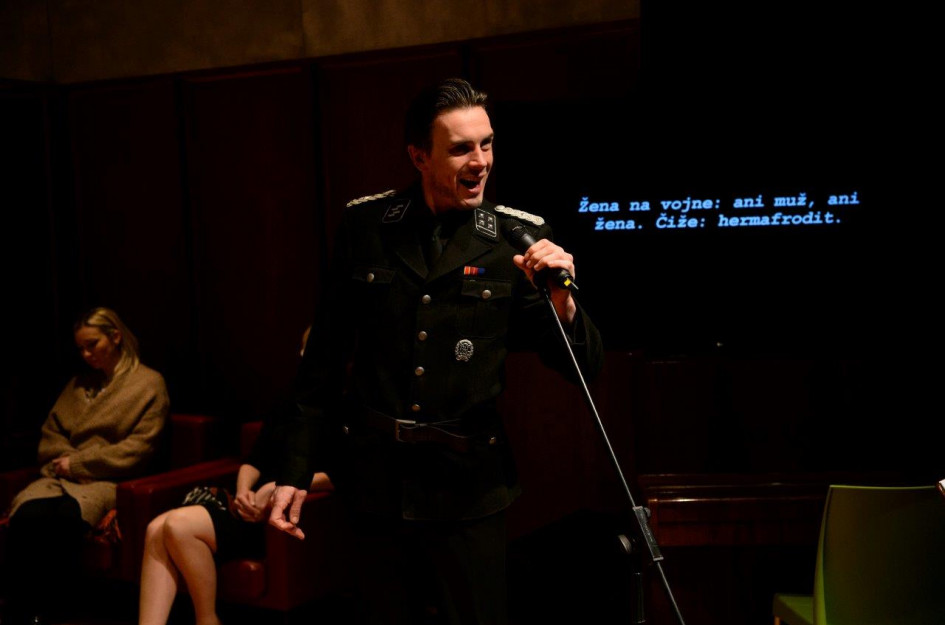 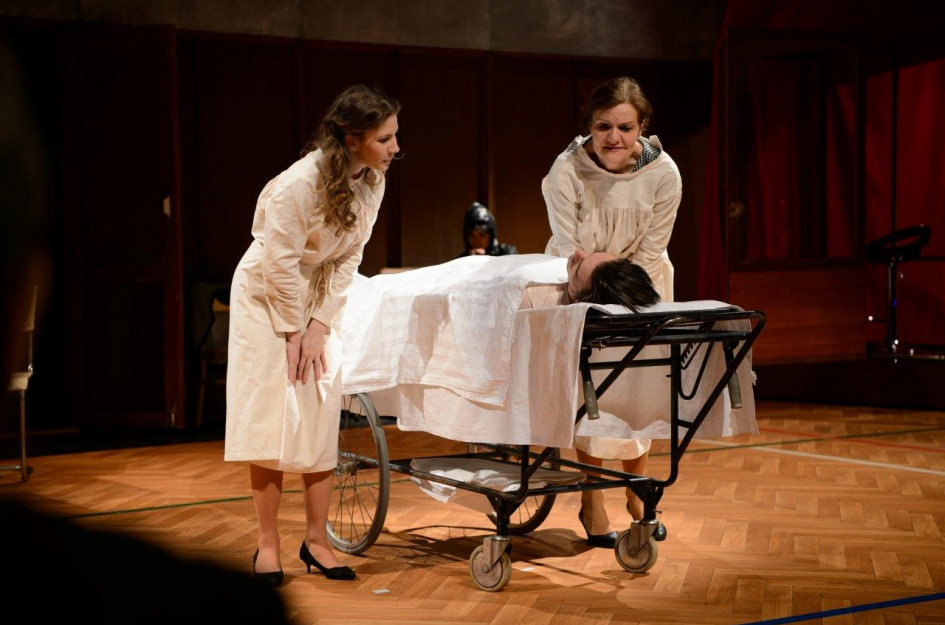 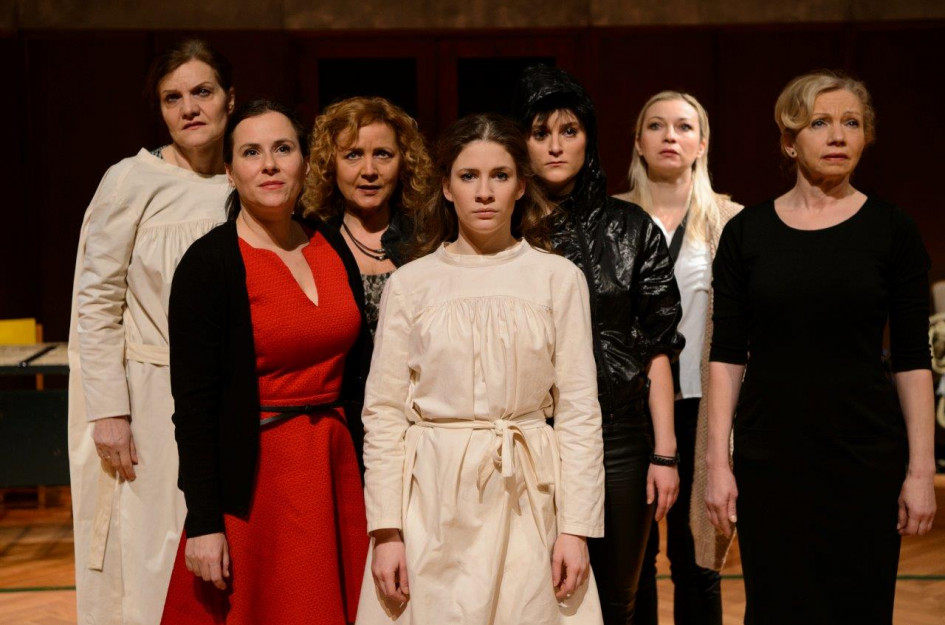 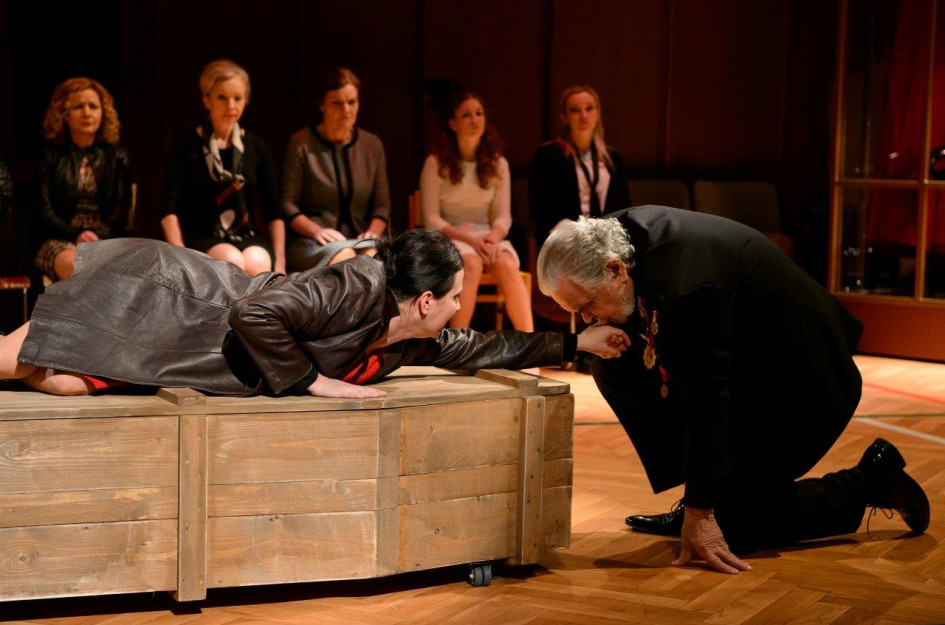 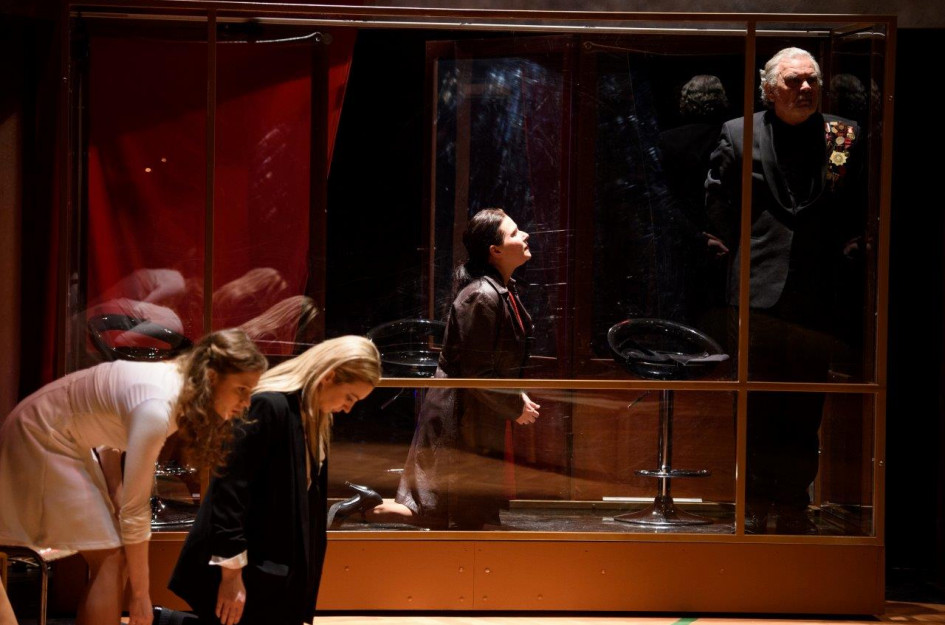 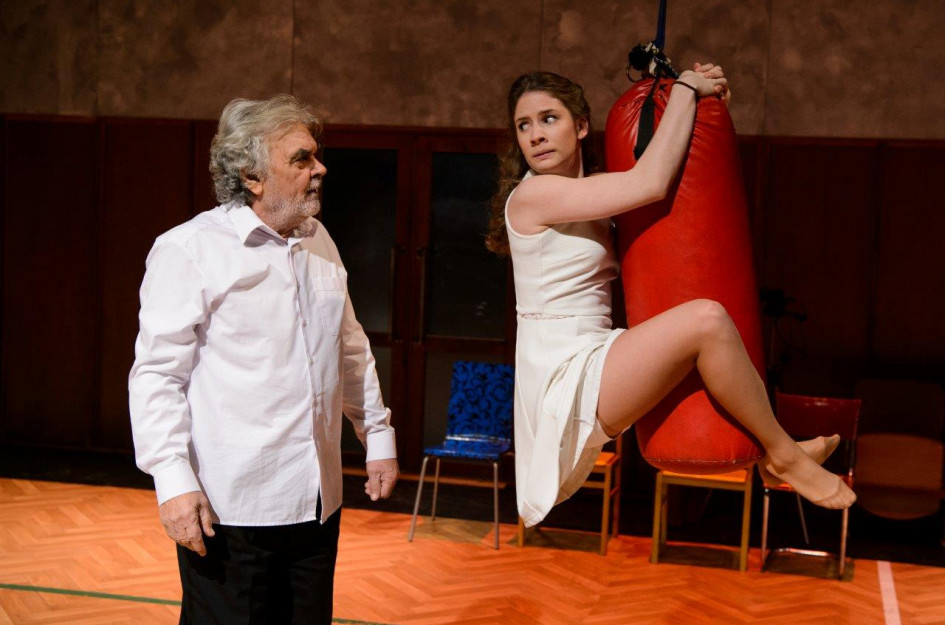 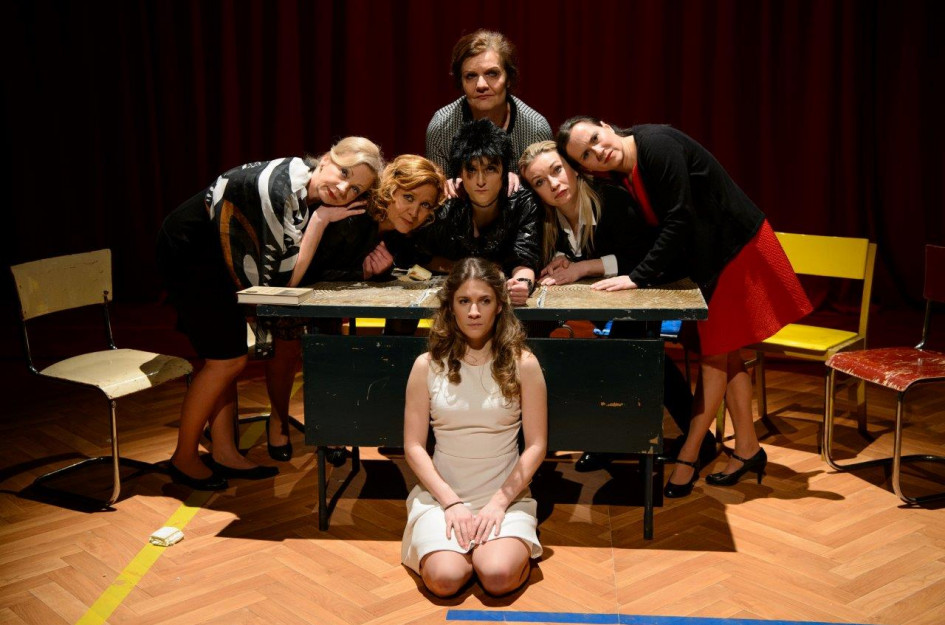 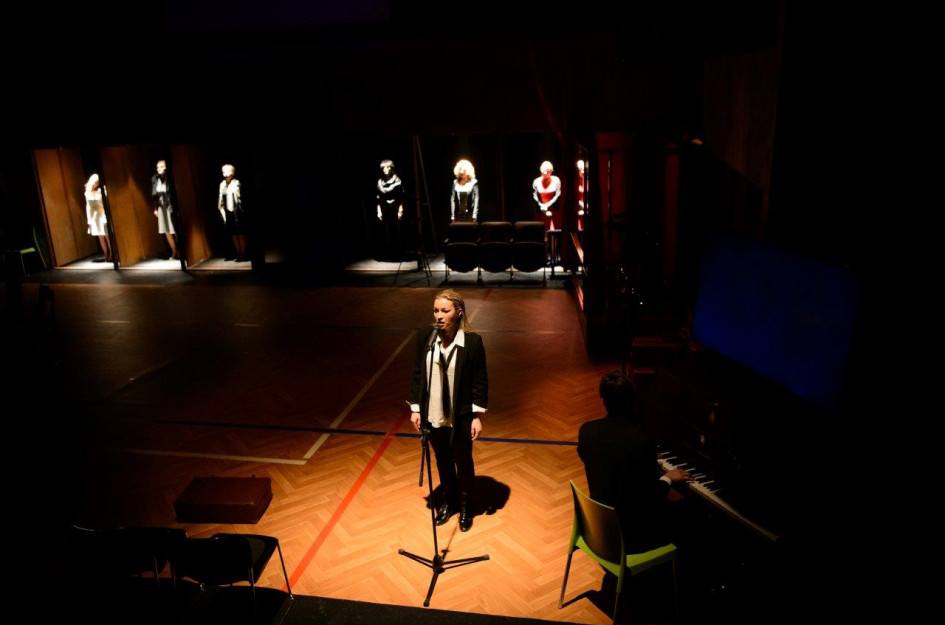 War’s Unwomanly Face brings to the stage the novel by Belarussian author Svetlana Alexievich who won the Nobel Prize for literature for it.  Just like the book, the theatre production is based on a documentary taking its cue from oral history. However, the play aims to mediate primarily the emotional world of Soviet women who were active soldiers during World War II. It is an epic production, sensitively woven from the women’s pars pro toto stories told by seven female characters. The women perform either as a choir (one voice for all women), or individually in order to present their intimate confessions, memories, feelings – in other words, everything they have experienced and could not talk about. Initially, it was impossible to talk about all the cruelty and pain and later nobody seemed interested in it. Wars write history and history belongs to the heroes and victors. After all the suffering, however, Soviet women did not feel as heroines or winners. They lost their youth, beauty, femininity to the war – as well as their ability to love and live normal lives. In the Soviet Union, many of them were referred to as war prostitutes and spent their lonely lives in the modest conditions of lodging houses. Instead of respect, they faced cruel mockery and doubt about their role in the war. But history marches on… The artistic tandem Iveta Škripková and Marián Pecko focused on what is behind written history. They focused on the women’s faces and souls which lived this history for real. They focused on every second of every day they spent on the war front, next to men, weapons, injured and dead people. It is the more powerful when the audience sees the inner strength and courage of the women, their pragmatism, their ordinary fear and desire. As if, along with their stories about war and death, we were also listening to intimate stories of unrequited love, of emotions and fantasies.

Iveta Škripková graduated from the Academy of Performing Arts in
Bratislava in film and television dramaturgy and script writing (1985) and from
the Faculty of Arts of Constantine the Philosopher University in Nitra, where
she majored in aesthetics (2016). In 1985 she started working for the Puppet
Theatre on the Crossroads in Banská Bystrica as a dramaturge, and in 1992 she
became the theatre’s director. As a dramaturge, script writer and director, she
has produced dramatic and literary work for children and adults – mostly in the
Puppet Theatre on the Crossroads where she had created numerous adaptations as
well as original plays. She has been shortlisted for several Slovak and
international drama awards (Drama, the Alfréd Radok Award, and the Golden
Theatre Frog). The winning plays were published in Slovak collections and
journals, and produced on home stages. Since 2002 she has focused on the female
experience from the gender point of view – this has led to the creation of
several projects, texts and productions and, in 2007, to the establishment of
TWIGA Studio (Theatre Women Improvisation Gender Action).

Marián Pecko works as a stage and artistic director at the Puppet
Theatre on the Crossroads in Banská Bystrica, where he has presented over fifty
productions for children and adults. In 1992 he presented a profile production
that paved his way to regular performances and works for adults under the title
You Move Me So Much… (Fragments from the
Life and Work of Dominik Tatarka). Later he directed his first project in a
collaboration between the theatre and Matej Bel University titled Shamanesses (2000 – 2001). Several of
Pecko’s productions for adults and children have been included in festivals in
Slovakia, the Czech Republic, Poland and other countries. As a director he has appeared
as a guest in various drama and puppet theatres in Slovakia (Andrej Bagar
Theatre, Jonáš Záborský Theatre in Prešov, and City Theatre Žilina), Poland and
the Czech Republic.